The majestically titled ROQ ROYALE was a band put together in the second half of the ’80s by erstwhile Gambler vocalist/guitarist Nathan Shaffer, although it’s fair to say the group’s almost mythical status has been achieved thanks to the involvement of Legs Diamond keyboard maestro Michael Prince.
The band was signed by a major label and recorded their debut at the end of that decade, but incredibly the record company refused to publish it. Completely incomprehensible if you keep in mind how much money was spent for the production by Roy Thomas Baker (Queen, Journey, Foreigner) and the excellent level of quality the music had.
Fortunately, “Roq Royale” finally sees the light of day for our pleasure thanks to AOR Heaven Classix series.

Cut at Enterprise Recording Studios in North Hollywood, Roq Royale (the name being chosen thanks to wanting a ‘royally majestic sound’) is a wonderful slice of pure ’80s Melodic Hard Rock / AOR with a touch of Pomp AOR.

Stylistically, Roq Royale can be compared with Network, Autograph, Touch, Vital Signs, and of course, Legs Diamond.
The latter comes not only because of Michael Prince’s involvement, but also because two of the album’s tracks (“Walk Away” and “Find It Out The Hard Way”) were already used for the Legs Diamond great mid-Eighties disc ‘Out On Bail’.

Also included is a cover version (much more AOR) of Squeeze’s classic “Tempted”, and “Never Felt Like This”, a remake of an old Gambler number. Even though all of these songs have a high level of awareness, they are not the strongest material to find on the disc. 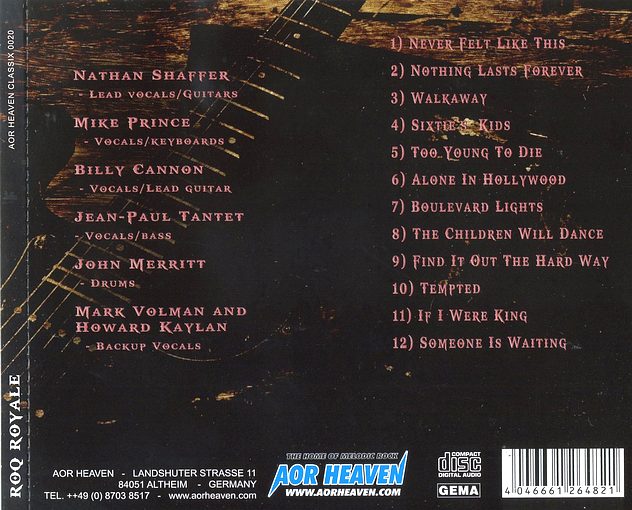 Usually the AOR Heaven record label at his ‘Classix’ series takes care of re-issuing albums that have evolved in estimated classics and sought after rarities over the years since its first release.
Roq Royale is an exception as the release of their one and only album is a true first publication.

This is a pure styled late ’80s AOR / Melodic Hard Rock little gem plenty of great songs with ‘that’ unrepeatable sound & production, and in view of the myths and legends around it, the limited edition of 1,000 copies is destined to be sold out quickly.
Get yours pronto.
HIGHLY RECOMMENDED