One of you asked for an accurate version of MOTORHEAD‘s final album “Bad Magic“, and here it is taken from the Limited Edition Ecolbook Digipak, with a luxury booklet including doodles / drawings made by the late Lemmy Kilmister.

Despite this band’s music is not exactly the cup of tea of this blog, this last Motorhead album deserved a place here not only as fitting tribute to Lemmy but also because it’s good record.
Few people bet a dime for the band’s future due to Lemmy Kilmister’s ongoing health issues. But the man though has stuck two fingers up at his illness and has proved many wrong by returning both to the stage and studio. Status Quo once said ‘Rock ‘Til You Drop’, Lemmy’s philosophy in one.
For that attitude only, Motorhead’s “Bad Magic” album deserve a listen.

Honestly, I never liked Motorhead too much. Their brand of square, no-frills heavy rock ‘n roll is ok with me, it’s fun, but too much noisy for my melodious ears. Anyway, a couple of tracks of them in a hard rock playlist are always welcomed. As said, Motorhead are fun rock ‘n roll.

So I did not followed the band since the last 20 years, at least.
And you know what? “Bad Magic” is not ‘bad’ at all. I would not say that is ‘magical’, but it’s darn effective.

Rampant and old school, Motorhead screams out at you from the very first track ‘Victory Or Die’, a typically feisty Motorhead number with Lemmy barking out the vocals. This then leads into ‘Thunder & Lightening’ which finds the guys in full flight with a huge riff from the Welsh wizard, Phil Campbell, a classic Motorhead track.
These two cuts set the theme of the album well, listening to it you get the feeling that they wanted to prove a point and show they were still firing on all cylinders.

One song that enforces this message is the blistering ‘Shoot Out All Your Lights’. Drummer Mikkey Dee is on steroids during this song and provides a massive driving rhythm whilst Campbell and Lemmy beat their instruments into submission, live this song will be an absolute monster.
Well, the rest is typically Motorhead: a wall of sound to make your ears bleed.

It’s not all fast and furious though as ‘Till The End’ slows things down a bit and finds Lemmy in good voice. The song it’s a half-ballad, but still classic Motorhead.
They deliver something different as well with the very good ‘The Devil’, where Queen’s Brian May makes a guest appearance adding a scintillating solo on this sleazy bluesy rocker. 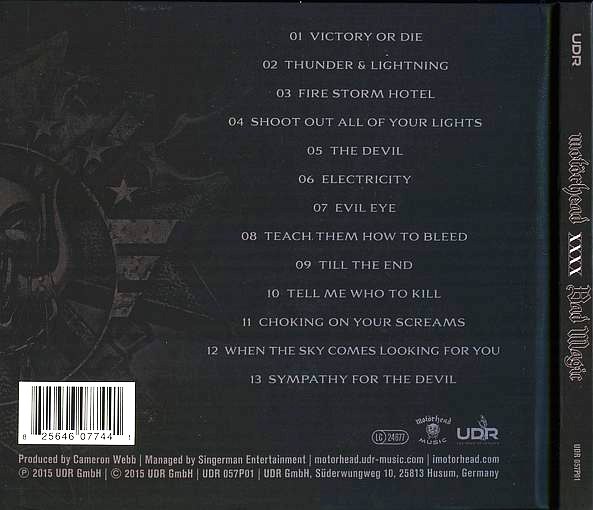 “Bad Magic” is more than proper farewell from a band that made history, and Lemmy will remain forever in al metalhead’s heart.
It’s heavy, rocking, bruising as all Motorhead stuff. The songs are short, to the point, and this benefits the album to its flowing. As said, not my favorite band, but if you dig them get “Bad Magic” with your eyes closed, it will not disappoint you.