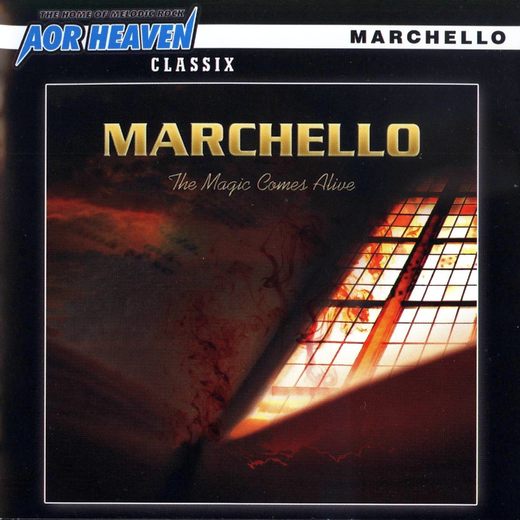 As part of the excellent AOR Heaven Classix series, “The Magic Comes Alive” by MARCHELLO is one of these little gems not only full digitally remastered by the prestigious German label, but officially released for the first time as well.
This release appeared few years ago strictly limited to 1000 copies, and now turned out of print with remaining copies being sold at Amazon for € 770 !

Despite having released a debut album at the tail-end of the ’80s (entitled Destiny) that has since become a bit of a cult favourite amongst more than a few aficionados of melodically tinged hard rock, for MARCHELLO – the band of guitarist & vocalist Gene Marchello – things turned out with their 2nd disc.
Marchello’s debut gained a reasonable amount of interest in the States thanks to encouraging levels of airplay on MTV for their first video and a fair bit of touring. But their label, as happened with many bands of the genre when the musical climate began to change, dropped Marchello’s contract.

Then, the follow up album Gene and his band mates (bassist Nick DiMichino, drummer John Miceli and keyboard player Gary Bivona) recorded, remained unreleased for over twenty years.
But never is too late, and AOR Heaven Records released it for the first time under the title “The Magic Comes Alive”.
Gene Marchello recalls that the band’s original record label opted to bring in a couple of producers to the recording (whose names he cannot remember) in order to complete a project that resulted in more than enough material for an album planned to feature no less than fourteen songs.

The finished record certainly provided evidence that Gene had learnt a great deal from the experience of recording & touring, and thus features vocal performances full in confidence and akin to a cross between the styles of erstwhile Journey vocalist Steve Perry and Danger Danger frontman Ted Poley.
His guitar skills shows a clear development as well, redefining his style influenced by the likes of Eddie Van Halen, Vito Bratta (White Lion) and Yngwie Malmsteen.

The 14 songs in “The Magic Comes Alive” deliver some killer rockin’ tunes ranging from elaborated Melodic Hard Rock to straight American Hair Metal.
We have Van Halen-like rockers as “Boys Night Out”, Hair Metal anthems in “The Power Of Money” and “Rock Me”, or awesome AOR waves such as the Journey influenced “Every Man’s Lover” and “Wall Of Paper”.
Furthermore the album contains a cool cover version of “I Feel Good” from the King Of Soul James Brown arranged in a hard rockin’ way.

So in this lost album you get everything ‘people like us’ liked to hear back at the end of the ’80s / earlier ’90s, with very good production and polished sound.
A previously unreleased gem greatly digitally remastered by Chris Lyne (Soul Doctor), including extensive liner notes and unseen photos.
A collector’s piece.
HIGHLY RECOMMENDED