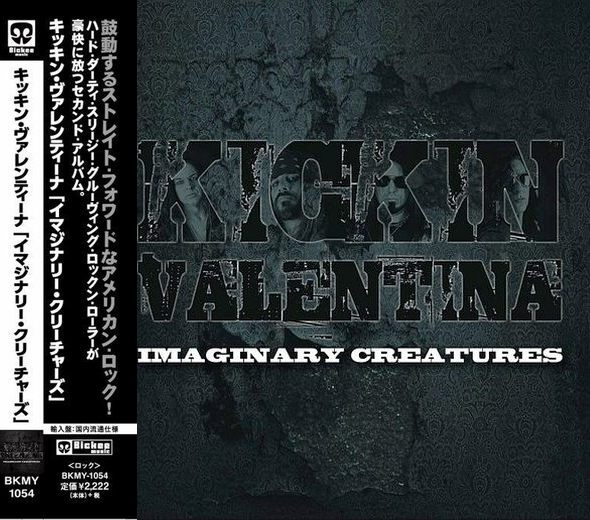 We have been closely following on this blog the evolution of KICKIN VALENTINA, the current American answer to all the ’80s sleaze hard rock coming from Scandinavia. Today August 11, the guys from Atlanta, GA, are releasing their new CD titled “Imaginary Creatures“.
After the first spin one thing is for sure; they have matured as musicians, and they rock harder than ever.

If you’re new to them, Kickin Valentina fuses together elements of rock’n’roll, hair metal, melodic rock and sleazy hard rock. However, in “Imaginary Creatures” the four-piece smell more like gasoline than hairspray, a bunch of songs that packs a ‘Mike Tyson in his prime’ punch.
From the moment they pop the clutch in the lead up to the first track “Eyes” to the final note of the title track, the band takes you on a high-speed adventure of down n’ dirty hard rock (but really melodic) that you won’t want to end.

The songwriting is superb throughout the album with lyrics you cannot help but sing along with as you listen. In songs like “Turns Me On”, “Street”, “Heartbreak” and “Imaginary Creatures”, your body just wants to dance to the beat.
Others, such as “Eyes” and “Devil’s Hand”, feature scorching guitar solos from guitarist Heber Papillon. Drummer Jimmy Berdine expertly keeps things chugging along at a steady pace. As I would expect from a bluesy, sleazy rock type band, the bass from Chris Taylor is exceptionally well done and very prominent in the mix. In fact, it really helps hold together the other instruments.

Let’s take a brief moment here to appreciate the vocals of Joe Edwards. His rough, husky voice sets the tone for the band, evoking the appropriate emotion for each tune.
No more apparent is this than in the semi-power ballad “Crazy”, an ode to that part of us that is just a little bit out of control and reckless.
Kickin Valentina does a cover of Elvis‘ “Burning Love”, an ok version but I felt was unnecessary. They can write their own darn good songs.

“Imaginary Creatures” would have turned platinum thirty years ago. You can hear many of Kickin Valentina influences here from Guns N’ Roses, Junkyard, LA Guns to Motley Crue and beyond, and everything in between.
However, while Kickin Valentina‘s sound is reminiscent of the glory days of ’80s US Glam Metal / Hard Rock, the have a distinctive touch with their own raw edge.
I strongly recommend you purchase “Imaginary Creatures” so that you can put a little more hard rock in your life. There is no doubt in my mind that this album is one of the best sleazy hard rock releases of 2017.