The new HIRSH GARDNER album My Brain Needs A Holiday will be released as well in a Limited Deluxe Edition 2-CD pack including his first long out of print solo album “Wasteland For Broken Hearts“, freshly remastered for the first time.

For fans of pomp AOR arena rockers New England who wanted and needed more from John Fannon, Gary Shea, Jimmy Waldo and drummer Hirsh Gardner will be delighted, as the band reunited here on Hirsh Gardner’s solo album “Wasteland For Broken Hearts”.
The band showed up on the excellent final track, “More Than You’ll Ever Know,” a song with a theme similar to their Top 40 hit ‘Don’t Ever Wanna Lose Ya’, and on “Welcome Home,” co-written by John Fannon: another fine song which seems like a sequel to the group’s ‘Explorer Suite’, the title track to their second album from 1980.

“Wasteland For Broken Hearts” is a remarkable record, engineered and produced by Gardner, who wrote all the songs, with the exception of the aforementioned “Welcome Home,” as well as the covers of cult AORsters 8084 “Thunder In Her Heart” and John Spinks’ 1986 Top 10 hit with his band The Outfield, “Your Love.”
The “Your Love” version is really cool, and though it complements the work well, the nugget here is the title track “Wasteland for Broken Hearts”. It has Buddy Sullivan on bass and lead guitars with Gardner providing vocals, drums and keyboards. It is an amazing re-creation of the New England sound and is everything that group’s fans could hope for.

“Don’t You Steal” continues the assault; it’s a solid picture of the music Gardner is so familiar with, the singer/composer again playing drums and keys with Jim Smith on lead and rhythm and Chris Carvallo on bass.

What is happening on this disc is that different musicians step up to the plate giving the songs subtle flavoring while maintaining the precise vocal-multi-harmony dreamy crunch New England’s fan base adores.
Andre Maquera (from cult AORsters 8084) adds his bass and guitar to “She Is Love.” The pair are joined by Frank Barnes (also 8084) in “Thunder In Her Heart,” with double bass on a tune that would no doubt have garnered more chart action if properly promoted.

Gardner’s wife, Tracie Gardner, who met Hirsh in the 1980s when he was producing her Boston band The Core, shows up on the pretty “When The Sky Cries,” along with Michela Gardner, and on “Hold Me In Your Dreams,” which former New England producer and Kiss member Paul Stanley would be wise to cover himself.
There’s a fun moment with the ridiculously catchy “Bad Cowboy”, and “Never Love” provide more layered harmony vocals galore. 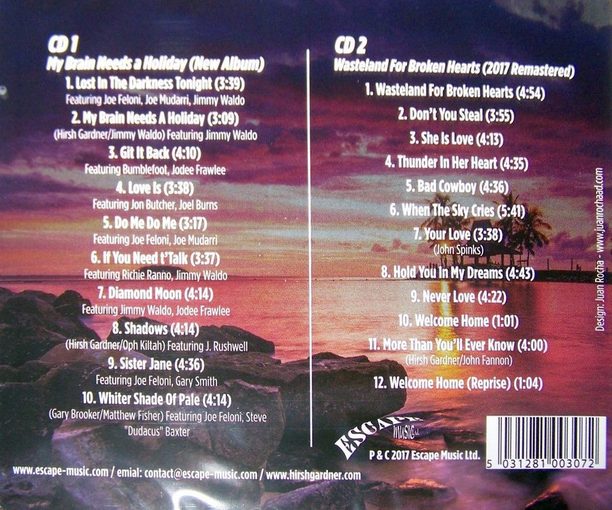 “Wasteland For Broken Hearts” is a complete and sterling work by a journeyman artist staying true to the sounds he has worked with for over 30 years: Melodic Rock / AOR with a classic feel.
Gardner’s songwriting style is far more inventive than the ‘by numbers’ approach of many in this genre. Darn, and you have 2 new New England tracks here!
This fresh remaster is much more punchy than the original release, delivering a more separated, clearer sonic aura.
Very, Highly Recommended