On occasion of H.E.A.T‘s tour all over Japan presenting their album “Tearing Down The Walls”, Avalon / Victor Entertainment re-released the album on high quality SHM-CD plus a bonus disc with rare tracks.
Re-titled “Tearing Down The Walls / Tour Edition“, the release includes the Japanese original bonus track ‘Shame’ and an extra 5 track CD.

Once again the guys decided to move to Bohus Studios with Grammy award winning producer Tobias Lindell for this fourth effort, the second with vocalist Erik Gronwall.
“Tearing Down The Walls” is a blast since the beginning. Actually, opener “Point Of No Return” is my favourite track on the CD. It starts quietly with a keyboard and acoustic guitar intro for around a minute before exploding into the main body of the track. And when I say, it explodes, I mean it.
Pounding drums and wailing guitars join forces with a driving rhythm to great effect, laying the foundations before a chorus to end all choruses kicks in and blows my mind. The first time I heard this track, I found myself smiling and nodding my head in appreciation almost immediately.

In the past H.E.A.T has impressed thoroughly with a blend of Melodic Rock with a healthy dose of Classic Rock reverence thrown into the mix. Where “Tearing Down The Walls” differs is that it takes that sound and builds on it. This is an album that retains those H.E.A.T trademarks and turns up the volume, kicks out the jams and lets fly with a more intense sound.

Indeed, the sound is larger than life and the songwriting style is obviously focalized on the dynamics / hooks, and a little less on the harmonic side than before, yet the melodies are everywhere, very addictive and contagious.

First single “A Shot At Redemption” has a real party feel to it with its relentlessly catchy upbeat feel and that really strong chorus. It reminds you Slippery When Wet-era Bon Jovi.
The DNA of the band is still clearly tagged toward MR / AOR (ckeck the awesome “Mannequin Show”), only updated by classic overtones (the terrific Def Leppard-like “Enemy In Me”), with a solid coherence with their newly balanced style between Melodic Heaven (the highlight “We Will Never Die” and “All The Nights”) and Hard Rock Hell (“Inferno” and “Eye For An Eye”), the whole thing is enhanced by new arrangements yet still very classy but in a new found density. 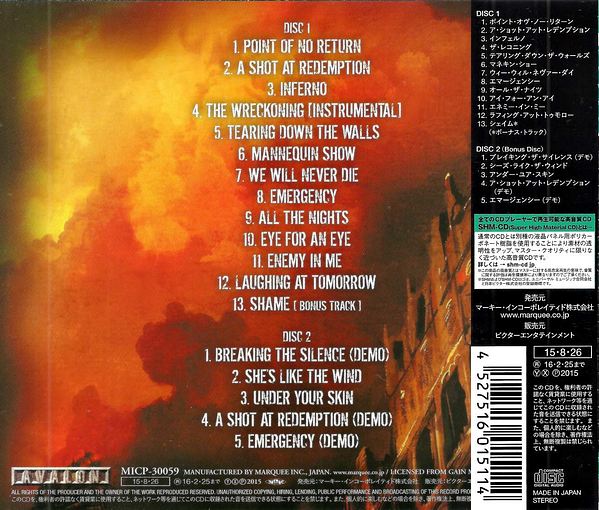 This Japanese Edition includes the bonus track “Shame”, a melodic rocker ready for the arenas with a pulsating rhythm, killer guitar work and a Europe (Kee Marcello era) vibe.
The bonus disc includes an alternate version of ‘Breaking The Silence’ (a track from the previous album), different takes on ‘A Shot At Redemption’ and ‘Emergency’ (listed as demo versions but sounding great), a punchy new track in ‘Under Your Skin’, and a sweet cover of ‘She’s Like The Wind’ made popular by Patrick Swayze in the ’80s (Dirty Dancing movie).

The Swedish combo is at the top of its glory, at the peak of their art / mastery of musical craft on this “Tearing Down The Walls”, a CD that will soon be considered, rightly, as a cornerstone of their career.
A Must