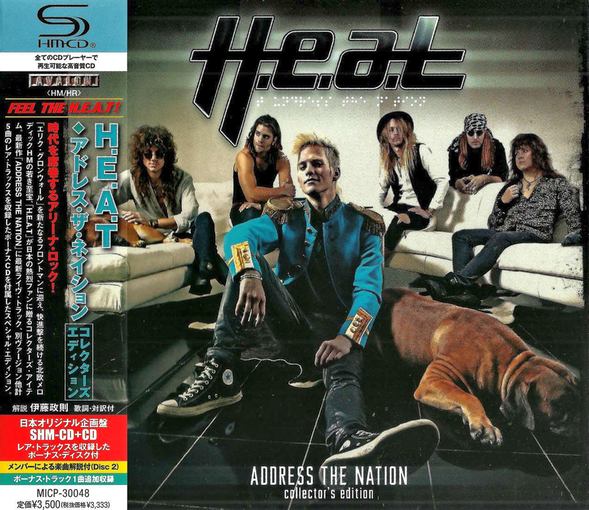 On occasion of H.E.A.T‘s tour all over Japan presenting their album “Address The Nation”, Avalon / Victor Entertainment re-released the record on high quality SHM-CD plus a bonus disc with rare tracks.
Re-titled “Address The Nation / Tour Edition“, the release includes the Japanese original bonus track and an extra 5-track CD.

After the unfortunate departure of vocalist Kenny Leckremo, H.E.A.T recruited the winner of the 2009 edition of Swedish Idol; Erik Grönwall. The guy certainly proved he was up to the job with excellent live performances, and many a breath has been held waiting for the band’s debut with the new boy.
Grönwall does not disappoint in any way here, and those who predicted a doom laden future for the band after Leckremo left, were really impressed with Erik’s performance.

Each track on “Address The Nation” is a snapshot of what rockin’ AOR is all about, with big choruses and joyful bouncing galore. Only the final track, “Downtown” has a seriousness not associated with the band, but it makes up for it by being a superb – if moody – track with a first class guitar solo.

Opening track “Breaking The Silence” really showcases Grönwall’s vocal ability, bringing to mind his awesome ’18 And Life’ Swedish Idol audition in 2009. It doesn’t hurt that it’s also one of the best songs the band has produced, and I love the fact that for each album they have opened with a kick ass track that really puts you in the mood for the rest.
But the album is full of wonders. 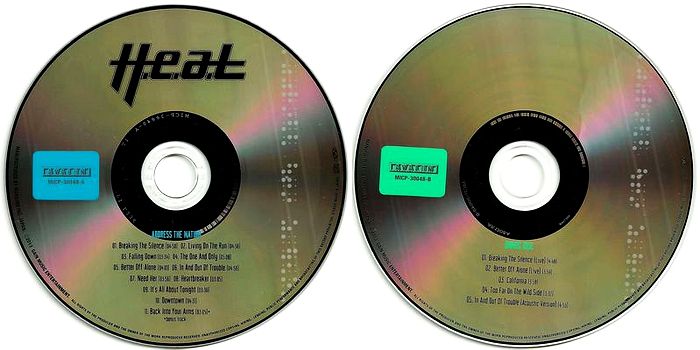 “Living On The Run”, “The One And Only”, “Better Off Alone”, “Heartbreaker” are all pure AOR / Melodic Rock heaven, with a modern and updated style. The band even adds some original sax on “In And Out Of Trouble” to expand their lush, thundering sound.
Japanese bonus track “Back Into Your Arms” is great as well, anthemic and arena-ready.

The bonus CD is one to treasure; you have two hot live versions of ‘Breaking The Silence’ and ‘Better Off Alone’ (both more ‘heavy’ than the originals), the very good studio / B-sides ‘California’ (midtempo AOR) and the racing ‘Too Far On The Wild Side’, plus a quite different, acoustic version of ‘In And Out Of Trouble (Acoustic Version)’

“Address The Nation” is one of those albums that you listen to several times in a row, because time goes so fast when it’s on. And you look to push the ‘repeat’ button again and again.
A wonderful fusion of sharp guitars, swirling synths / keyboards and a fantastic voice, “Address The Nation” finds H.E.A.T in its finest moment.
A Must