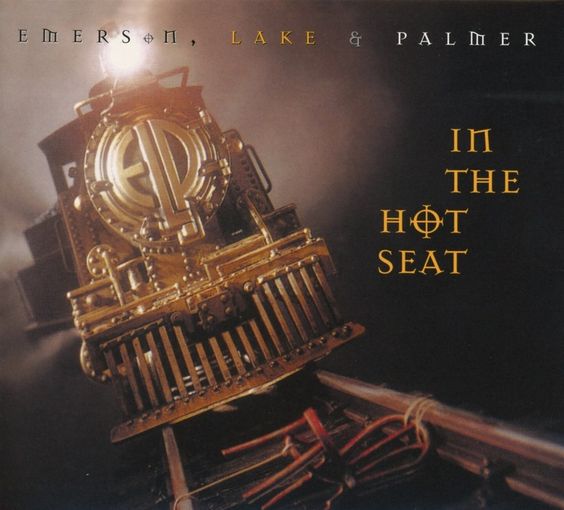 “In The Hot Seat“, ELP’s ninth and final studio album has just been released in a 2017 Deluxe Edition remastered for the first time. While among prog purists this is considered as Emerson, Lake & Palmer weakest album, for me it’s a very good one because comprises an interesting mixture of mainstream rock (almost AORish), classic ELP prog, melodic rock and finely crafted ballads.
It was produced by Keith Olsen (Europe, Whitesnake, Foreigner) so you know what to expect in terms of sound.

Originally titled ‘The Best Seat In The House’, “In The Hot Seat” was released in 1994 following the band’s successful 1992 world tour comeback album ‘Black Moon’.
“In The Hot Seat” was an appropriate name, given that the trio was under pressure to consider adopting more ‘commercial’ material.
Then ELP devised many great tracks, notably the excellent ‘Hand of Truth,’ that launches Disc 1 of this double CD set. There’s a Greg Lake heartfelt ballad in ‘Daddy’, written in memory of missing child Sara Anne Wood and used to raise awareness of missing children.
A personal favorite of mine is ‘Hammer It Out’, where ELP combines their classic style with a modern, early ’90s lush sound.

Another asset is the inclusion as bonus tracks the studio recording of Mussorgsky’s ‘Pictures At An Exhibition’, a live version of ‘A Time And A Place’ and Keith Emerson’s grandiose ‘Piano Concerto No.1: Third Movement.’

Disc 2 has a dazzling array of re-mastered ‘live’ performances with ELP playing with typical energy on a dozen fully remastered 2017 tracks.
Among the highlights are ‘Tiger In The Spotlight,’ ‘Hoedown,’ Keith Emerson’s solo piano hit ‘Honky Tonk Train Blues’ and a brace of medleys comprising ‘Fanfare For The Common Man’, ‘Rondo,’ ‘21st Century Schizoid Man’ and ‘America.’ 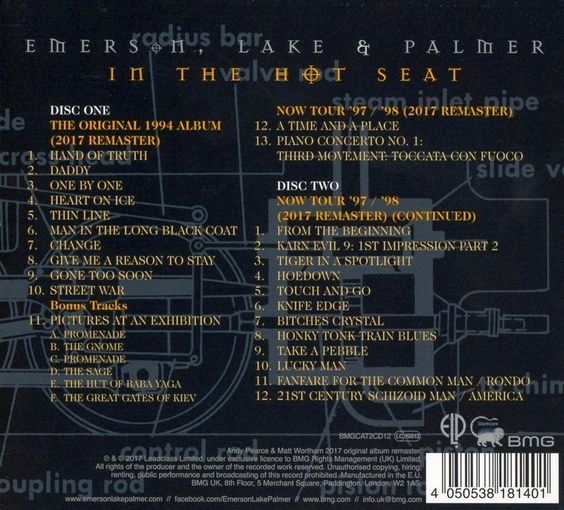 Expertly remastered for the first time by celebrated rock studio engineer Andy Pearce (from Rock Candy headquarters) this Deluxe Edition of ELP’s “In The Hot Seat” should be listened by fans of all Rock genres.
It’s a polished, smoothly produced album arranged with an accessible approach still retaining ELP’s essence.
Highly Recommended