DAMN FREAKS hails from Florence, Italy, a project formed this 2017 including current Tygers Of Pang Tang vocalist Iacopo Meille. This is one of the selling points listed for their self-titled debut, but also that it sounds like classic ’80s hard rock and Harry Hess (Harem Scarem) is mixing the whole thing.

Press release says “We all wanted to capture the vibe that we loved way back in the ’80s when we were listening all day to White Lion, Bon Jovi, Motley Crue, Dokken and David Lee Roth”.
Now when I hear name-checking like that I must admit it is normally accompanied shortly after by a real sense of disappointment, but there is always that moment just before you hit play when you imagine what it would be like if they got it right…

“Damn Freaks” is certainly an album that captures some of that late Eighties hard rock groove. It’s not ground-breaking in terms of songwriting but it’s fun stuff well played and arranged.
There’s some solid work here: the competent ‘Burning Up’ puts one in mind of Ratt, while ‘The Way I Feel’ has the sort of drawn-out, drowsy air that reminds me of Lost Behind The Wall by Dokken, one of the best songs from Back For The Attack. 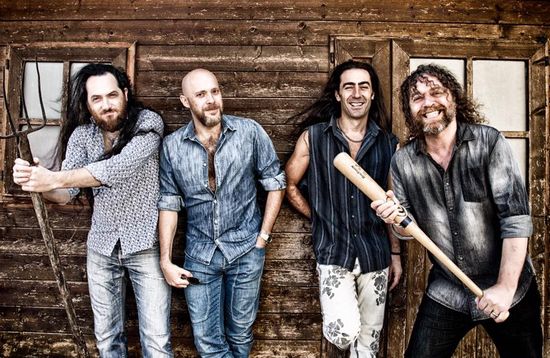 You’ll enjoy the “rock outs” that include the robust ‘Break The Chains’ and ‘Dream Highway’ – both examples of fun, good driving music; then there’s a competent midtempo ballad ‘Sea Of Love’ and the fiery and catchy closer ‘Take A Ride’ which could only have been born out of the ’80s.
‘Poison Apple’ stands head and shoulders above the other tracks by virtue of its slightly progressive chords that contain hints of commercial Rush or the Elefante bros. band Mastedon.

“Damn Freaks” is a fine, enjoyable, simple but fun collection of songs made to be played loud and the soundtrack of many a Saturday night.