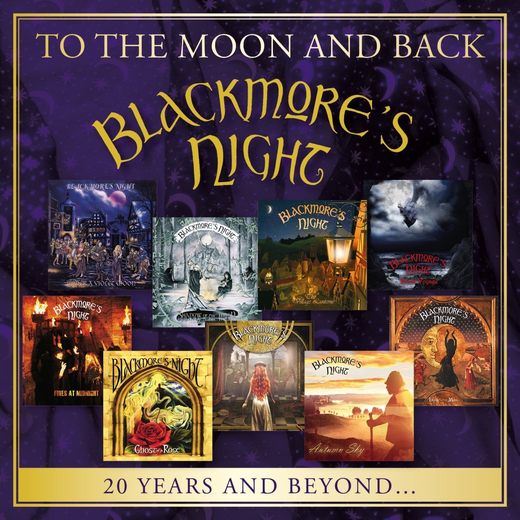 2017 marks the 20th anniversary of BLACKMORE’S NIGHT — the internationally heralded Renaissance rock band helmed by six-string extraordinaire Ritchie Blackmore and his wife, vocalist / multi-instrumentalist Candice Night. To celebrate, the band will release “To The Moon And Back: 20 Years And Beyond…“, a two-disc collection of favorites and new material, on August 11.

Blackmore’s Night debut album ‘Shadow Of The Moon’ was released 20 years ago, in May 1997. Since then, Ritchie Blackmore (Deep Purple, Rainbow) and his muse and meanwhile wife Candice Night have been creating a symbiosis of medieval melodies, mystical lyrics and modern musical arrangements.
Their idea of fusing classical elements and Renaissance music with the ‘here and now’ is quite original, but never has been my cup of tea.

However, this fresh release compile the best from Blackmore’s Night, and honestly has its moments, especially Disc 2.
CD1 contains 13 of the best tracks from their successful albums plus an exciting 9-minute live version of the fan favourite ‘Home Again’. Among the best cuts, ‘Ghost Of A Rose’ is a great tune that would not been out of place into an early Rainbow album.

CD2 is more interesting for collectors, and particularly Ritchie Blackmore fans.
The disc boasts 5 never before released new versions (re-done 2017), 5 of Ritchie favourite instrumental tracks selected by himself, as well as the current digital only single by Ritchie Blackmore’s Rainbow, ‘Land Of Hope And Glory’ (a reworking of British patriotic anthem “Pomp And Circumstance March No. 1”, written in 1902).

There’s brand new songs as well: ‘Ghost Of John’, which proudly introduces the vocals of Autumn Blackmore (the 6-year daughter of Blackmore and Night), and as bonus track a cover of the famous Rainbow tune ‘I Surrender’, with Night providing the vocals – which works really well.

Blackmore’s Night music has its very good moments with Ritchie skillful movements between acoustic and electric guitar, mandolin, cello, and hurdy gurdy, Night’s ethereal vocals and command of seven medieval woodwind instruments (bagpipe, chanters, etc), and the consummate musicianship of keyboardist / back-up vocalist Bard David, violinist Scarlett Fiddler, bassist / rhythmic guitarist Earl Grey, and many more.
Some kind of a ‘Best Of’ that worth the addition to your Blackmore / Rainbow / Deep Purple collection.