“Baptized By Fire” is the new album by Americans AERACO, one the best American hard and heavy rock bands you’ve never heard of. Unless, of course, you’re from their native Chicago where, last year, they won the Chicago Music Awards’ Best Rock Entertainer of the Year on the strength of their debut album. But they garnered some international acclaim as well like write ups in Fireworks magazine and airplay in the UK and Italy.
Essentially a DIY band, Aeraco returns with their sophomore effort “Baptized By Fire”, mastered by Grammy award winning engineer Brian Gardner.

At first, perhaps due the album’s cover and the band’s name, I was expecting some extreme metal. Wrong.
Basically, the foundation of Aeraco’s sound is classic, notably Eighties, hard rock and traditional US metal. Somebody’s been digging through their father’s vinyl collection…
Think a mix of Y & T, the first Icon, Riot, Ugly Kid Joe, some Impellitteri, some Alcatrazz, all with tons of groove and a ‘classy’ sound production.

With this sophomore album Aeraco have announced to the world that they’re ‘back with a vengeance’ with the opening track titled – you guessed it – “Back With a Vengeance”. From there on in, the album grabs you by the throat and just doesn’t let go, gouging itself on the finest ’80s metal and rock influences.
Each and every time a new track begins it catch you instantly and it’s not like Aeraco are just reusing the same the old recipe for the same old outcome either.
There is more than enough variety on this album to keep the listener enthralled despite the long tracklist.

They’ve crafted instant, contagious songs such as the title track ‘Baptized by Fire’ and ‘In Vain’ via the simple use of catchy vocals and even catchier riffs, and proven that they can slow it down with the metal love song ‘All I Know’.
Honestly, it’s almost the perfect storm for melodic metal infused hard rock. For more edgy numbers check ‘The Outlaw’, ‘Lone Wolf’, and there’s something of a metal anthem in ‘Withered Rose’.
While the hard rock groove is self-evident throughout, it rises more in ‘Cum To Rock’, ‘In Hell We Trust’ (with some Judas Priest vibe), and the catchy hangover tune, ‘Tequila And Lime’. 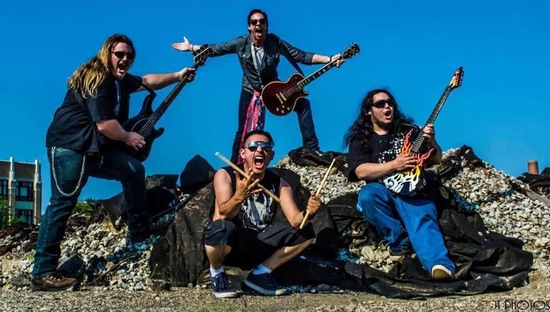 Aeraco blast us back to the good old ’80s days with their new album “Baptized By Fire”. They are pure oxygen for classic US metal / hard rock die-hards and a must listen for anyone even remotely interested in the genre.
The band rarely miss a beat on this album to bring us a flawless 60 minute experience which is sure to be the envy of many major bands in 2017 and beyond. Aeraco sounds fresh, authentic, and there’s the difference.
As the band themselves say on the second track – “I came to Rock”. Yes you did. Let’s rock along with them.
Highly Recommended