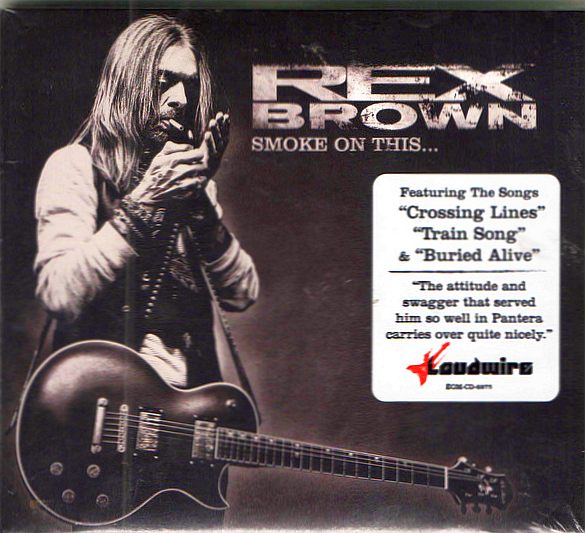 “Smoke On This” is the debut solo album of REX BROWN appearing today July 28. Perhaps for many the name doesn’t ring a bell, but Brown has been the longstanding bass player of Pantera, an integral part of an iconic band that made metal history and continues to shape metal music to this day.
Yet, “Smoke On This” finds Rex Brown stepping out into the limelight as master of his destiny for the first time. And for good measure he’s singing, playing lead & rhythm guitar here (don’t worry, though, he’s also the four-string player).

Musically, if you are expecting a Pantera spin-off, you can forget it. Fortunately, Brown has teamed up with his good friend Lance Harvill to write an album that cherishes the roots of classic rock music.
“Smoke On This” cruises along the highways of rock music on a pan-head Harley soft-tail weaving tenacious rock, slamming grooves, and a touch of southern. Think Zakk Wylde solo and with his band.
Basically, this is traditional hard rock, and very well done.

The album kicks off with the speed-shifting rocker “Lone Rider” and then eases into “Crossing Lines” which exudes a bit of southern rock influence. The hooks are barbed and deadly on these tunes.
Rex is handling rhythm guitar and lead vocals on the album, with sharp riffs and meaty solos. His voice has a warm and gritty tone that fits each song like a well-worn leather glove.

“Buried Alive” is a fantastic song and captures the essence of this album. The song deals with Rex’s loss of his friend Dimebag Darrell and his recovery. One line from this song that resonates strongly is “I had to find me”.
In fact this album is Rex finding his own voice and his own musical expression. This song included an emotionally gripping guitar solo by Lance Harvill.

Harvill as well adds rich and evocative backing vocals on “Fault Line”. This song is dreamy and beautiful, from the wistful opening guitar refrain to the delicate piano at the ending, this tune’s poignant sadness is really emotional.
Turning things more modern, “Best Of Me” had me thinking of some of the best that the Stone Temple Pilots recorded. There is a psychedelic rock vibe that permeates this one. Drifting and swaying during each versus, the song kicks you in the head with a powerful chorus. You can imagine a smoke-filled room with a man lost and angry at a relationship gone wrong.

The final song on the album “One Of These Days” is destined to be a classic. The opening tension is cut with the shutting of a door. Rex then sings the chorus and the momentum shifts building in grandeur with each successive versus. The ending feels triumphant and hopeful.

“Smoke On This” is a flat out stupendous rock album. Rex Brown and co-writer Lance Harvill drill into the rich earth of rock music to take the listener on a rock and roll adventure.
From the hard-hitting gritty rock of “Train Song” to the groovy psychedelic vibe of “Get Yourself Alright”, this album fires on all cylinders. It’s classic hard rock at places, modern at others, quite well balanced and recorded.
Strongly Recommended