RATT – Out Of The Cellar [Rock Candy remastered] AccurateRip

One of the most awaited remasters by Rock Candy specialists was RATT‘s classic “Out Of The Cellar“. At this point, you don’t need a description about this multi-platinum record that rocketed Stephen Pearcy & Co. to stardom, but for the new generations, here we go:

Nobody was prepared for the Los Angeles hard rock explosion of the early ’80s except, funnily enough, the bands themselves. Activity in the clubs on Sunset Strip had reached tipping point by the time Mötley Crüe and Quiet Riot were packing out these venues and, just like an explosion in a circus, literally hundreds of bands came tumbling out of the hills ready and willing to claim a slice of the action.
Looking good and talking the talk might have worked for some but if you really wanted to hit the big time then you had to be loaded with talent and songs.

Step forward Ratt. With a successful independent EP eliciting a tsunami wave of major label interest, Ratt signed with industry heavyweights Atlantic Records and were put in the studio with rising production star Beau Hill (later to work with Winger, Warrant, Gary Moore) and record their debut album “Out Of The Cellar”.

Issued in 1984, the results were spectacular; a record that became a three million seller and produced two hit singles in “Wanted Man” and “Round And Round”, elevating the band to headline status almost immediately.

The secret to Ratt’s success was a unique sound, killer songs and great performances especially from guitarist Warren DeMartini and vocalist Stephen Pearcy. Full of energy, unabashed enthusiasm, musical dexterity and hooks that were instantly embedded in the nation’s conscience; this was a band that took no prisoners in their rise to success. 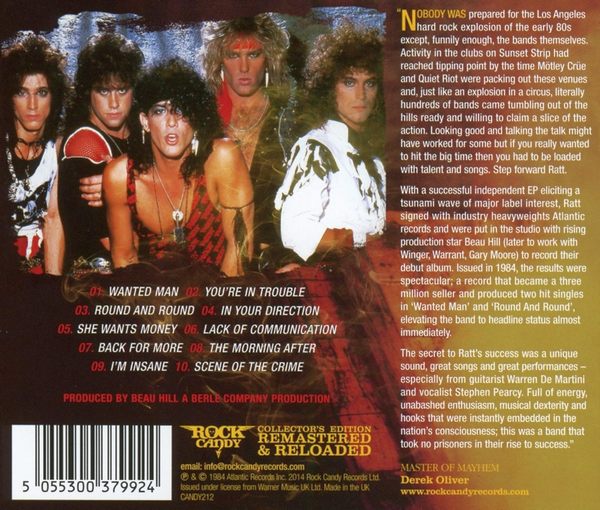 I do love this Rock Candy remastering shaped from 24 Bit digital technology; stronger bass frequencies, rich in harmonics and really well balanced overall. Forget that flat sounding original CD editions, this is the real deal.
A Must Have Classic