British progressive metal group PROSPEKT have a shiny, textured album on their hands with new album “The Illuminated Sky” released today. We were already impressed with the advanced track featured in one of our Advanced Releases compilations, but now after listening to the entire record it’s safe to say this is one of the ‘albums of the year’ in this genre.

And Prospekt’s genre or musical style straddles the fine line between classic melodic metal and prog, which should satisfy any desire for powerful vocals, virtuosic guitar soloing and pristine production sound.
The ’90s ushered in a new age of prog metal when bands like Dream Theater and Symphony X expanded on what acts like Fates Warning and Queensrÿche had started in the ’80s.

This new brand of prog metal was more deeply rooted in technicality while still writing good hooks. This led to many bands springing up in the ’90s who essentially sounded a lot like Dream Theater.
UK’s Prospekt would have fit right in during the ’90s, and while there’s DT, Tesseract and alike influences, they sound pretty much their own.

“The Illuminated Sky” not only marks the return of Prospekt (this is their 2nd effort) but it also sees a change in the line-up. New singer Michael Morris has the range needed for the type of music that Prospekt play. A what a set of pipes!
There’s also a new keyboardist in Rox Capriotti who as well works as ‘orchestrator’ alongside founder, guitarist extraordinaire Lee Luland.
The results are impressive.

Among my favorites is the title track which showcases the band’s incredible playing while still being catchy, and the busy ‘Beneath Enriya’ which sounds like a lost Symphony X track with that big sound along with piano parts I associate with Michael Piniella. 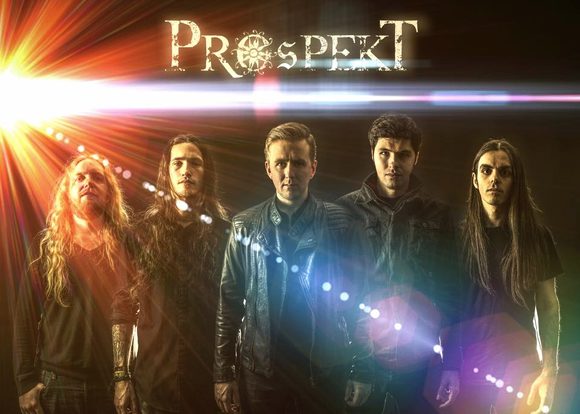 ‘Titan’ is another highlight with some Tesseract perfection to it, driven by meaty riff and relentless attack with very good rhythm section arrangements and keys. ‘Alien Makers Of Discord’ is winner too with several time signature changes and a great Greg Howe guest solo.

Prospekt aren’t reinventing the wheel here but they make it roll quite awesomely. All guy’s musicianship is top notch, and the power but at the same time melodic vocals easily sell the songs.
“The Illuminated Sky” is a sharp tech prog metal album in the way Circus Maximus, Dream Theater and alike USED to sound in ’90s. Prospekt are very classy regarding this particular sub-genre / era.
And very good at it.
HIGHLY Recommended