KIK TRACEE – No Rules [Japanese Edition +1] Out of Print 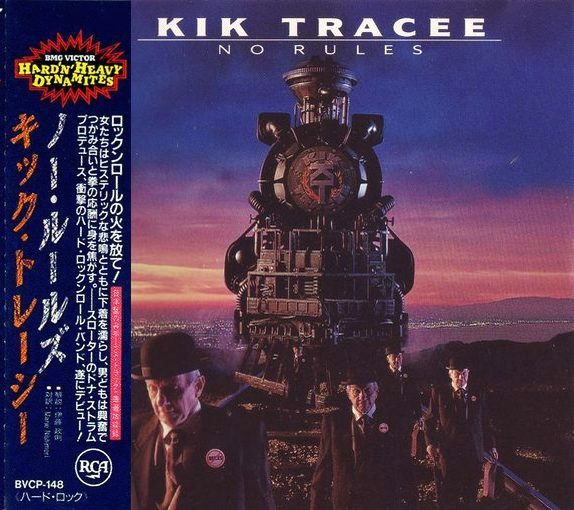 Californian melodic hard rockers KIK TRACEE will be releasing next month their first album in more than 25 years in the shape of a B-sides, demos and rarities double disc. In coincidence, one of you recently requested the band’s only full record “No Rules“. The album never was reissued so this rare Japanese edition featuring a bonus track is a treasurable piece in your collection.

For a brief moment in the early ’90s, many rock insiders predicted huge things for Kik Tracee. The Los Angeles melodic rock group had already conquered their famously competitive local club circuit and signed a record deal with RCA.
Their debut album, 1991’s “No Rules” featured hook-laden rockers typical from the era, but Kik Tracee offered many more sonic treats.

Formed in L.A. in 1988 by guitarists Greg Hex and Michael Marquis, bassist Rob Grad, and drummer Scott Donnell (who was later replaced by Johnny Douglas) eventually recruiting Minnesota transplant Stephen Shareaux to be the band’s vocalist.
The group signed to RCA/BMG and recorded their Dana Strum (Slaughter) produced debut “No Rules” that quickly became a fan favorite, with the band being prominently featured in the Rock Press and finding some success with their singles ‘Don’t Need Rules’ and ‘You’re So Strange’ which landed just outside of the Billboard Top 40.

“No Rules” is listed among the 50 “Best Hair Metal Albums of All Time” by Rolling Stone Magazine, and deservedly so.
It’s a killer album packing stupendous songs and a huge production, but as said, they were much more than your typical Hair Metal act. Yes, with Dana Strum at the producer desk there’s some Slaughter mixed with Saigon Kick, Slick Toxik and maybe a dose of heavy Ratt or Guns ‘N Roses.

However Kik Tracee were more imaginative and elaborated in the songwriting department, plus all member’s excellent musicianship.
The clear centerpiece, “Big Western Sky” feels as expansive and full of possibility as its title, “Lost” is a unique, stark acoustic number with a haunting vocal melody, and even the single ”You’re So Strange” adds some inventiveness not usual in this type of acts in the early ’90s.

All that it’s surrounded by melodic hard rock awesomeness: the catchy opener to get fans involved (“Don’t Need Rules”), the delicious cover of the classic “Mrs. Robinson, a dance groover in “Soul Shaker” or the stuttin’ “Generation Express”.
“Velvet Crush” is the best tune Van Halen never wrote in the ’90s, and on the bouncy “Tangerine Man” and “Rattlesnake Eyes (Strawberry Jam)” there’s even more fruit.

Musically speaking, “No Rules” had everything going for it, but in 1991 the musical climate started to change and the record failed to crack mainstream radio and its sales ultimately disappointed the group and RCA. After releasing an EP in 1992, Kik Tracee went their separate ways.
This Japanese edition has become a very rare piece, including as bonus track the melodic “Gentle Persuasion”, another showcase for the band’s versatility.
HIGHLY Recommended