AIRKRAFT – In The Red [AOR Heaven Classix remastered] Out Of Print

Requested some time ago, here’s the hard to find AIRKRAFT album “In The Red” in its AOR Heaven Classix remastered form, appeared not so long ago but already out of print.
While the first two albums from this American melodic hard rock band were released via an independent label only, things seemed to turn for the better with the third AirKraft record “In The Red”. The band got signed by Curb Records and the production duties were handled by the experienced Roger Probert (Loudness, Fates Warning).

Originally released in 1991, with “In The Red” AirKraft was finally poised for a major breakthrough including awesome songwriting input from the likes of Jack Ponti (Alice Cooper, Baton Rouge), Judithe Randall (Mark Free, Roxus, Kymera) and Stan Bush.
Well, we’ve all seen the phrase “should have been huge” used before, and it more than applies here.

AirKraft had that late ’80s Melodic Rock sound down to a science with this album, hitting just the right balance between American AOR and the Hollywood hair metal sound.
The result is an album with plenty of hard rocking moments, but one that is still driven by fantastic melodies, catchy hooks, strong vocals and big choruses perfect for singing along.

The songs by outside songwriters – leadoff rocker “Someday You’ll Come Runnin’,” “Heaven” and “Love Has No Mercy” are obvious highlights, but the band members could put together some great tunes as well, as evidenced by the catchy “Feed Me to the Fire” and “Tonight.”
AirKraft enjoyed some measure of success with “In The Red”, but it lasted less than a year. They were dropped from their label just in time for grunge to arrive and push melodic rock (way) back underground.

Success story or not, AirKraft’s “In The Red” is a first class Melodic (Hard) Rock / AOR album from start to finish. It belongs in the collection of just about anyone who loves bands like Giant, Prophet, House Of Lords, Atlantic, Shooting Star, etc.
For years hard to find and traded hand by hand by collectors, finally “In The Red” received its deserved reissue via the German record label AOR Heaven and its Classix series.
Unfortunately, it is sold out now and out of print. 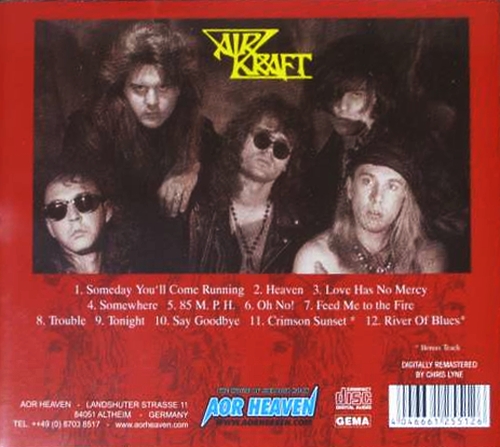 There’s two previously unreleased tracks included as bonus (both obviously demo tapes), but what you need is the main “In The Red” remastered in all its glory.
The sound quality is superb, blowing out of the water the low signal transfer of the original CD release.
Out of print, and if you’re able to find it at a decent price, buy it eyes closed (thanks to Pablo for providing this hard to find one!)
HIGHLY RECOMMENDED