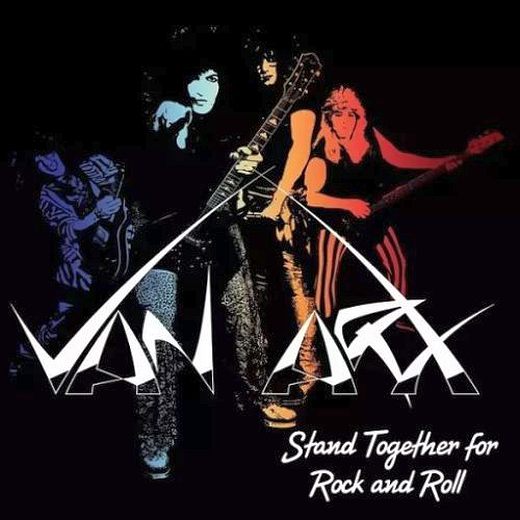 VAN ARX appear to be a Swiss cover band that graduated to doing their own material. “Stand Together For Rock and Roll” is their debut album released worldwide (including the US).
While their appearance is a bit reminiscent of a “parody” band and their songs a bit on the simple side they seem to be decent enough and able to churn out sufficiently catchy material, in the vein of Kiss, Mötley Crüe, Poison, Ratt, etc, with a production that doesn’t belie any serious budgetary constraints.

Van Arx formed already back in the ’80s, but in the early 1990s they split up. All members continued working in the music business, and with the resurgence of classic rock especially in Europe they decided to reunite and since then never stopped to play shows.
“Stand Together For Rock and Roll” includes their own songs written for this album, but you’ll hear many references and homages.

The Swiss band’s hearts clearly beat for ’80s Hard Rock, particularly the glam rock / hair metal sub-genre. You can also see this when looking at their outfits. With wigs, make-up and plateau boots they live their Sunset Strip fantasies, and this is what the audience look for assisting to their shows.

Van Arx feature three different lead vocalists, depending on the song. One sings with more, the other with less talent but at least the voices fit to the particular songs.
With the exception of drummer Sticky Martin, everyone in the band takes over lead vocal duties, which is a good idea because it contributes to the songs’ versatility.

hough the songs often remind you of hits by aforementioned artists – there’s some Kiss’ bars on ‘Make My Day’, some Ratt in ‘I Want Some Girls’ or Motley in ‘Send the Devil to Hell’ – there’s some tracks where Van Arx deliver a more personal style.
Title track ‘Stand Together for Rock and Roll’ is a ridiculously catchy tune with some Wig Wam on it, and ‘Stay Tonight’ is a fine, darn good midtempo melodic rocker.

Add Van Arx to the Sunset Strip current revival scene, and while there’s better bands doing this – as the opposite as many think, a sub-genre not so easy to recreate – these guys have the chops and round-up some catchy, fun, entertaining songs.
Two thumbs up