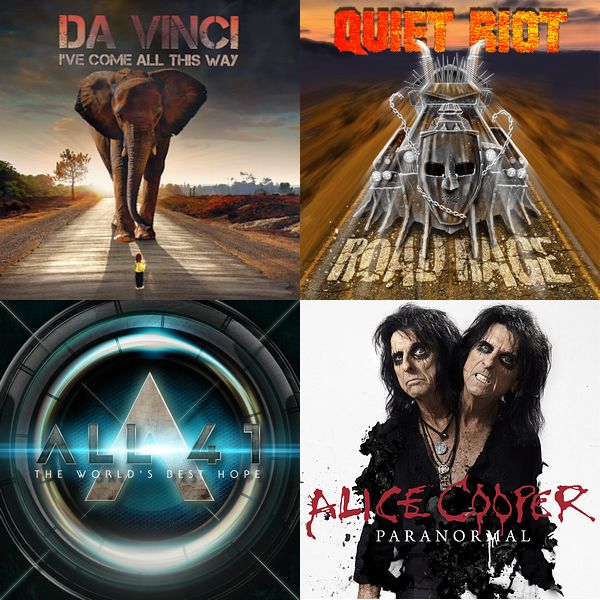 More & more very interesting releases coming up this Summer. Let’s check the more relevant Melodic Rock / AOR advances just appeared.
Holy cow, one of the most wanted ever comeback in the genre always has been from Norwegians DA VINCI. Well, today June 23rd, 2017, Da Vinci are releasing their first single in over 25 years! And what a terrific, keyboard-driven AOR tune it is. Full album available via AOR Heaven Records in a couple of months.

We have here more advances from much anticipated Frontiers Music releases such as ALL 4 1 with an amazing new cut ‘Who Knows’. The band features no-other than the amazing Terry Brock on lead vocals (Giant, Strangeways), Robert Berry (Three, Alliance) on bass and lead vocals, Gary Pihl (Boston, Sammy Hagar, Alliance) on guitar, and Matt Starr (Ace Frehley, Mr Big) on drums.
Finally, after the re-recordings with new vocalist the first track from the new QUIET RIOT album has surfaced: the rocking ‘Freak Flag’.

Also from the Italian label we have the first advance from cult proggy AOR act WORLD TRADE new album after many years. The band include some of L.A.’s most recognized studio and songwriting talents: Billy Sherwood (Asia) and Guy Allison & Bruce Gowdy (the core of Unruly Child). Their third album, “Unify” will be out August, 2017.
And the 3rd advance from GRAHAM BONNET BAND ‘Stand In Line’ is really awesome. A killer song and a killer raw performance.

Legend ALICE COOPER has presented the first single off his forthcoming new album “Paranormal”. The guitar-driven ‘Paranoiac Personality’ is a perfect entry point to Alice’s searing hard rock record.
There’s a new, young Melodic Rock / AOR band coming from Sweden: RIAN, which will be launching thier debut CD soon. Check out a couple advances titled ‘Out Of The Darkness’ and ‘Remember’… pure classic ’80s MR / AOR!

And for the end we have to mention female fronted melodic rockers XTASY with a new track titled ‘Said And Done’, elegant prog rockers SOUL SECRET with the elaborated ‘What We’re All About’ (new album soon), and if you like – and miss – the very first, early Faith No More sound then you must check THE BIG DIRTY, a new American band still unsigned – and their cool single ‘The Rhythm Of My Drum’.
More to come…