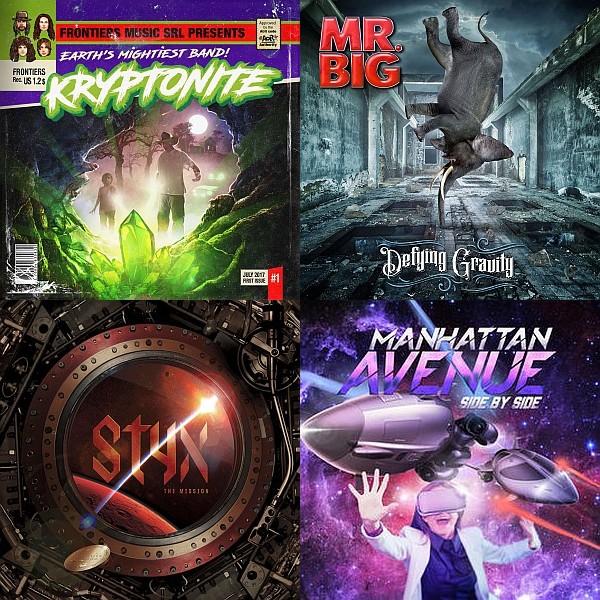 As usual 0dayrox brings to you all the fresh buzz from the Melodic Rock / AOR world. Let’s check the advanced singles from the most relevant releases in months to come.

KRYPTONITE is the new amazing project to release their debut CD via Frontiers Music in August. The line-up is impressive: Jake Samuels from The Poodles, Alessandro Del Vecchio (Lionville), Pontus Egberg (formerly of The Poodles and now the bass player for Treat), Robban Back (ex-Eclipse) plus young and immensely gifted guitarist Mike Palace. You will love what they have cooked up for you.

Also from the Italian label we have not one but two advances from MR. BIG upcoming album. This band never stops to surprise me. Love the amazingly titled single ‘1992’ (it says all) and the crazy ‘Everybody Needs A Little Trouble’.
Speaking about legends, STYX just released the second single from their new album. While the first was cool, with this new one ‘Radio Silence’ now we are talking… a great melody in a pure classic Styx fashion. Love it.

Formed by experienced musicians from Brazil (ex-Paradise Inc, Horyzon members), MANHATTAN AVENUE emerges as the new bet of AOR / Melodic Rock. Their first single ‘Side By Side’ mix the sounds of H.E.A.T, Journey, Work Of Art and more… can’t wait for the full album.

You have as well the third single (‘Song On Fire’) from NICKELBACK‘s upcoming album, the fresh ACCEPT track ‘The Rise Of Chaos’, and the initial advance from LIVING COLOUR new album.
Also there’s two comeback: Melodic Rockers SANTA CRUZ with a huge song titled ‘River Phoenix’, and modern hard rockers FOZZY with ‘Judas’ after the hiatus while frontman Chris Jericho focused on wrestling.

We are also presenting the locked down grooves of the first song from SAMARKIND, the new hard rock combo fronted by David Paul Byrne, the featured vocalist on ’80s cult movie ‘Trick Or Treat’ starring Ozzy Osbourne and Gene Simmons.
For the last you can hear ‘The Final Countdown 2016’, the first track from EUROPE‘s upcoming album The Final Countdown 30th Anniversary Show – Live At The Roundhouse to be released at the end of this month.