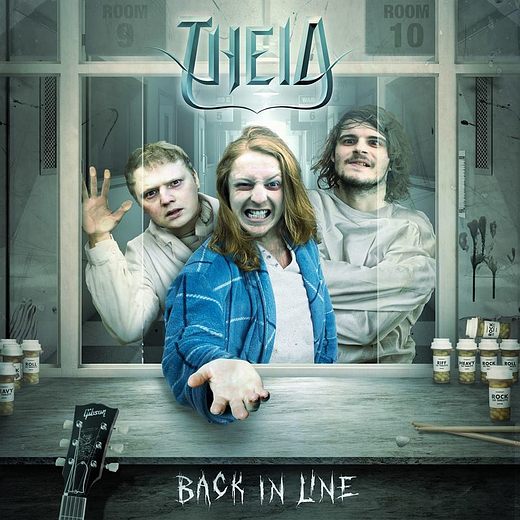 Three-piece THEIA, hailing from UK (Burton-on-Trent, one of the World’s most important beer town) are releasing their new album “Back In Line“. Here they are, making wonderful hard rock music, but perhaps because they are away from the massive metropolitan spotlights of London, say or the other big cities, they never quite get the attention they have long deserved.
This is Theia’s second full length, the first with new drummer Jake Dalton.

And whilst Theia certainly deliver the fun side of rock and roll, they undoubtedly have a foot in the serious camp as well, and the deceptively silly album cover not only causes the listener to be caught off guard by their deeper and darker material, but belies just how seriously talented this group is, and how colossal they sound.
After the intro track ‘Keezheekoni’, a cool, short western-style instrumental, there is the sound of shotgun cocking and the band blasts into ‘My Poison’, a dose of straightforward, enjoyable rock and roll full of swerving, bending notes, rapid fire riffs and a nice mix of hedonistic innuendo in the catchy lyrics and musical proficiency.

‘Whiskey Business’ – which ushers itself in with all the subtlety of a wrecking ball setting to work on a model village – is designed to be played live, while the title track is that side of the band that never really gets noticed amidst all their ability to write superb choruses; the chunky riffs. Kyle Lamley’s soaring, bluesy vocals are strong and engaging, as they are throughout the entire album, and the whole song puts a big smile on your face before finishing with a fun galloping riff.
The band are very good at balancing heavy themes with rocking catchiness, as is demonstrated on ‘Just Go’, a dark, angry tale about rape and the importance of consent that comes as a bit of a shock given the first two songs. Lamely’s distorted guitar radiates with fury.

‘Signed Sealed Cemented’ gently brings the tone back up slightly before ‘Paper The House’, the obligatory celebration of live rock and roll, blasts off at full momentum with simple, effective and bouncy riffs.
Then, out of nowhere, the band switches to acoustics for the reflective and introspective ‘Sparkplug’. Sombre yet still defiant, the simple mix of acoustic guitar and Lamely’s voice sounds great, but the band brilliantly builds up the sound throughout the song with a cello, drums and finally a slow-building electric guitar. 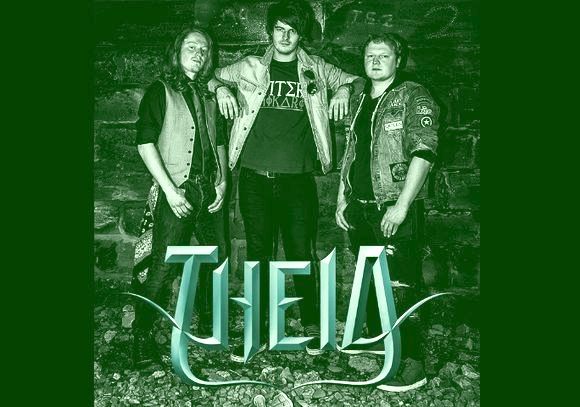 Theia slows down even more for romantic ballad ‘Home’. The mix of acoustic and electric guitar still sounds great building an emotional impact.
Finally the album concludes on ‘Afterglow’, an atmospheric, climactic mixture of all the styles they have displayed throughout: enrapturing Western elements, thumping drums, simmering, fuzz, catchy hard rock.

Theia’s “Back In Line” sound is huge. It is hard to believe this gigantic sound came from just three guys. The band has crafted a massive-sounding dose of captivating and ridiculously enjoyable traditional hard rock whilst exploring darker and softer elements of their sound without losing any momentum.
Lamely described it as “tearing its way out of the speakers, grabbing you by the ears and demanding that you rock from the first moment to the last!” He really wasn’t exaggerating…
Strongly Recommended