After many years out ot the circuit the TAZ TAYLOR BAND returns with their brand new record “Pressure And Time” released today via Escape Music. When I saw that awesome vocalist Chandler Mogel (Outloud, Punky Meadows) was chosen as new frontman for the band, I was more than enthusiastic and all in.

It has been a decade since Escape Music released the classic Welcome To America album in 2006 by Taz Taylor, a really strong CD with none other than ex Rainbow singer Graham Bonnet on lead vocals. Three years later and Straight Up was released with Keith Slack (MSG) taking the mike stand. The album also featured Don Airey (Rainbow / Deep Purple) on keyboards.
After these two really strong releases Taz Taylor decided to go instrumental and tour dates ensued with the likes of Ace Frehley, L.A. Guns, Molly Hatchet, Dokken, Skid Row, MSG and Great White to name but a few.

Bringing us up to the present day it’s time to return to a full band line-up that includes a vocalist and so Taz has used the incredible vocal talents of Chandler Mogel. Chandler and Taz have always kept in touch and it seemed the right time to collaborate on an album… and here is “Pressure And Time”.
This new 2017 release include 12 tracks chock full of exciting ideas and quality musicianship, original members Val Trainor and Barney Firks lay down a great rhythm backbone for Taz to show off his guitar playing prowess…

… and what prowess!!! Wow, Taz Taylor always has been a skillful guitarist, but man, seems the guy has evolved into a true six-string monster during the last years.
Take for sure Taz Taylor can play some mean guitar, easily swaying from classic rock and hard rock chops to heavy blues licks. If you’re into guitar-centered albums like I am, you will love this CD.
Also, Taylor can craft some catchy tunes as well. Besides the sweet harmony and melody coming from his riffs & leads, Taylor easily spins in some slick hooks with the a tight rhythm and groove, swollen vocal arrangements, and tasty refrains.

In other words, what you have with “Pressure And Time” is classic melodic hard rock, with significant and strong guitar work and wrapped in AOR accessibility.
There’s a fine variety of songs ranging from catchy rockers like ‘Something Is Ending’, ‘Kissed By Elvis’, and ‘Redline Angel’ (where Mogel vocals shine). Then Taylor drops in some blues groove within ‘Ash And Bone’, but even more so with ‘Secrets You Got Over Me’ with some ’80s Gary Moore on it. 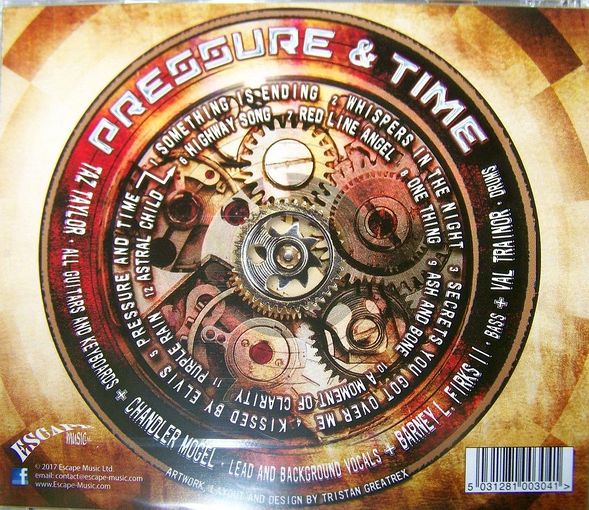 Being the guitar wizard he is, Taylor also drops two instrumentals, the short title track ‘Pressure And Time’ and the varied – never boring – ‘A Moment Of Clarity’. Additionally, he adds two cover songs: one is the iconic Prince song, ‘Purple Rain’, where Taz creates a great atmosphere.
The other cover is Blackfoot’s ‘Highway Song’, where Mogel sounds amazing over the acoustic guitar. Similar is the closing song ‘Astral Child’, with Mogel’s voice lighting over Taylor’s gentle nylon strings.