Legendary band STYX will release “The Mission“, their first Studio Album in 14 years tomorrow June 16, ‘The Mission’ via the band’s label, Alpha Dog 2T/UMe. This is STYX’s sixteenth studio album and and one of the most ambitious, most challenging release to date.
“The planets truly aligned for ‘The Mission’, and I couldn’t be prouder,” says vocalist/guitarist Tommy Shaw, who co-wrote the album’s storyline with longtime collaborator Will Evankovich (Shaw/Blades).

“The Mission” is an aurally adventurous 43-minute thrill ride that chronicles the trials, tribulations, and ultimate triumphs of the first manned mission to Mars in the year 2033.
From the hopeful drive of “Gone Gone Gone” to the stargazing machinations of “Locomotive” to the rough-riding blaze of glory that permeates the hard-charging “Red Storm” to the elegiac optimism of the closing track “Mission To Mars”, the album succeeds in delivering the greater good from a band that continues to fire on all cylinders, forty-five years after signing its first recording contract. 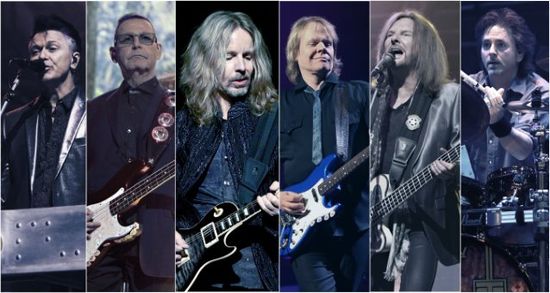 Yes, there’s a concept in “The Mission”, but you can enjoy every track as a standalone rocker. The brief instrumental “Overture” leads nicely into opener “Gone Gone Gone” – a great, uptempo blast of a song. This is followed by “Hundred Million Miles”; a superb song with the sweetest vocal harmonies and funky guitars, all polished to perfection with a production that lands just the right side of smooth.
“Trouble At The Big Show” starts off mid tempo guitar talk-back before soaring into classic Styx vocal harmonies, while Tommy Shaw’s superb playing leads us out.

Its followed by proggy keyboards and cosmic soul searching of “Locomotive”. While the album is certainly a welcomed return to the more progressive melodic side of the band’s sound, none of the songs outstay their welcome – “The Mission” is fairly lean at just over 43 minutes long.

One of the highlights of the album, “Radio Silence”, manages to smoothly weave the Mars concept into killer chorus. Complete with tasty acoustics and bounce in the mix, its actually hard to believe that a band 45 years into their career sound this good in the studio!
From the piano led balladry of “The Greater Good” to the shining Prog of “Time May Bend” you really have to admire Styx’s performance, both lyrically and sonically.
The album’s longest track, “The Red Storm” roves through pianos, drum breaks and guitar solos before ending with an old-school keyboard solo, along with outer space travel-log lyrics “There’s no turning back, going to make it to the mother-ship”.

The spoken intro of “All Systems Stable” serves as intro to the piano geek-out of “Khedive” which does come rather too close to Sci-Fi audio-book territory, which is followed by the gloriously ’80s joy ride that is “The Outpost” – with old-school synths, ripping guitars and soaring harmonies, it sounds like a tighter version of the band’s greatest hits.
The album artwork is solid and will presumably be expanded into their upcoming live concept shows.

In what might just be one of the most surprising releases of 2017, Styx have not only produced an outstanding album, but one of the finest records of their entire career, and who was expecting that?
Sounding better than they ever have, Styx return with a blast and deliver the seemingly impossible; an excellent Sci-Fi AOR concept album!
HIGHLY RECOMMENDED