Founded by guitarist Paul Samson, SAMSON were one of the seminal acts of the New Wave Of British Heavy Metal between the late Seventies / early Eighties. Best known for their first three LP with future Iron Maiden singer Bruce Dickinson (then ‘Bruce Bruce’), “Shock Tactics” is the band’s last album with the vocalist, now reissued in remastered form with the addition of 3 bonus tracks recorded during the original sessions.

Regarded by many as Samson’s finest album, 1981’s “Shock Tactics” was the last to feature Bruce Dickinson on lead vocals before joining Iron Maiden – who were coincidentally recording Killers, their last album with Paul Di’Anno, in the same studio at the same time of Samson’s “Shock Tactics”… Coincidence? I don’t think so…

Despite of being part of the NWOBHM, Samson’s style was more hard rock oriented than metal, with lots of melodies in the same wagon of Praying Mantis or Tygers Of Pan Tang.
In “Shock Tactics” the band’s songwriting had improved to a more direct, catchy, easy to the ear songs and a clear yet powerful sound.
The band also benefited greatly by the presence of producer Tony Platt, known for his work with Foreigner, Gary Moore, and… Iron Maiden’s first EP (another coincidence?) among other Rock acts.

Kicking off with their best-known song, the catchy “Riding with the Angels” (penned by ex-Argent singer Russ Ballard), other highlights include “Nice Girl”, “Earth Mother,” “Blood Lust,” and “Communion.” Paul’s riffs are sharp & clear, and his solos concise & effective.
Bruce’s high note, that ‘air raid siren’ style he is known for slightly appear on “Grime Crime” having a considerable amount of shrieking in them, but it does not exactly sounded like the end of Maiden’s Aces High. Although Bruce’s singing voice is warming up, his higher end has not been totally developed yet.

However, it’s fun, and enjoyable, to hear Dickinson doing a more hard rock stuff and complementing the classic guitar riffs with cool results.
“Communion” is a highlight, and it is also the lone ballad on the album. The Iron Maiden lyrical mentality for ballads is forming here with feelings of sadness and grief. This track it is just a nice acoustical melody which is practically just a vocal showcasing for Bruce. 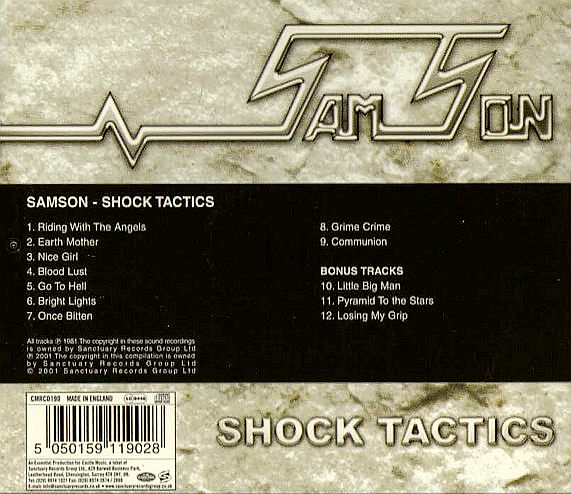 Samson’s “Shock Tactics” is a very good slice of classic British Hard Rock, consistent and very well produced.
This is a very welcomed reissue (the previous out of print is being sold at Amazon for £538 !) which although features an early 2000’s remaster, it feels really balanced, warm, like a new vinyl LP, (in fact, this reissue it’s also available in a luxury crimson 180gr. Vinyl LP).
And you have 3 juicy bonus tracks recorded at the original album sessions.
An underrated album that is definitely worth checking out.
Highly Recommended