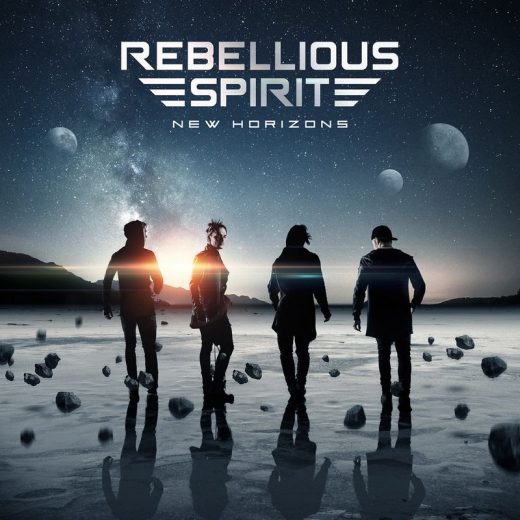 Hard and modern – that is how German rockers REBELLIOUS SPIRIT present themselves on their third album “New Horizons” just released.
Following their solid efforts (Gamble Shot and Obsession, both featured here at the blog) as well as numerous tours with i.a. Axel Rudi Pell, W.A.S.P., Freedom Call and Bonfire plus festival gigs, the band come out clearly matured in 2017 and are able to step up their musical game on the new album regarding hardness and musical range.

New influences being obviously reminiscent of the modern hard rock field are now integrated into their early melodic sound, leaving a lot of room to develop their very own style and eagerness to experiment.
In the way they do it, their music is quite fresh and quite interesting. However, their approach in some of the new songs may result a bit harsh for some listeners.

While still there’s melodious tracks such as ‘Wish For’, the acoustic mix in ‘After All’, or ‘The Core’ where they bring to mind Hardcore Superstar, the heaviness has been clearly increased in this record.
Take as example ‘Fuck’… title says all: it’s a rough, angry and indeed ‘rebellious’ song with very aggressive and dark riffs.

We found a calmer tune in ‘Give It a Try’ (not exactly a ballad), a cool melody in the vein of the band’s previous works on closer ‘Far Away’, and another slow song in ‘Eternal Desire’, which anyway explodes in the middle for a modern rock affair.

Rebellious Spirit has changed a lot for their third album “New Horizons”, an apt title as the band’s sound has a completely new approach.
I am not sure if this new focus will please the more traditional hard rock listener, but Rebellious Spirit are delivering an, at least, listenable slice of modern hard rock.
Definitely a grower, “New Horizons” doesn’t sound like everything else, it’s diverse and well conceived.
Check ’em out.