MEAN STREAK‘s fourth studio album called “Blind Faith” will be on the shelves in Europe today June 2, and in the USA on June 16. The ingredients of Mean Streak’s latest opus are exactly what you expect from a band dedicated to classic “keep it true” heavy metal: driving up-tempo beats, neck-breaking midtempo grooves, virtuoso guitar shredding, long drawn-out epic melodies and soaring vocals.

There’s no quibbling about Mean Streak’s sound. This is true classic heavy metal, drawing from the New Wave Of British Heavy Metal and tracing through to the ’80s hard rock.
Mean Streak has the fundamentals of the genre perfected to this new Century: twin guitar harmony in the riffage, stinging lead guitar solos, clean, melodic, and soaring metal vocals, and a vigorous and heavy rhythm that adds everything from power to speed to hard rock groove.
Already the opener, ‘Blood Red Sky’, contains quite a number of those elements: this is traditional metal indeed, uber melodic and it leaves out no cliché, including the high pitched note at the end of the last chorus – and this is meant in the most positive way.

On the other hand, second track ‘Animal In Me’ pretty much represents the band’s more hard rocking side, starting with AORish keyboards the developing into a midtempo groover with a shout-along chorus.
‘Settle The Score’ is rhythmically a bit more progressive and stands out with its intriguing middle section, while the mid-tempo rocker ‘Tear Down The Walls’ is probably the most relentless one of the several earworms on that album.

The epic, keyboard-laden intro to ‘Fire At Will’ is followed by a twin guitar attack whose end is somewhat reminiscent of Judas Priest.
After the more commercially appealing and catchier hard rocker ‘Caught In The Crossfire’ plenty of ’80s winks, ‘Gunnerside’ concludes the album with yet another melodic metal onslaught in true classic fashion. 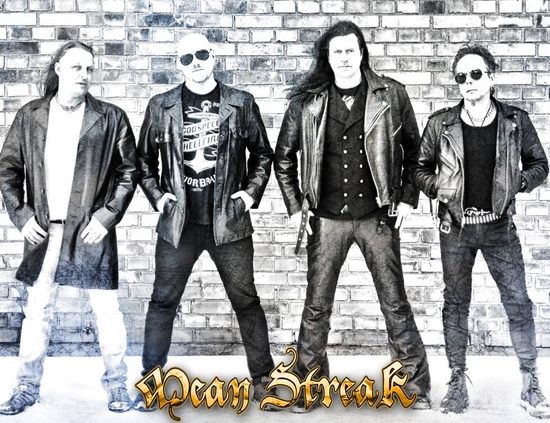 In an increasingly uncertain world where stability is rare and traditions are being lost, it is most reassuring when every now and again somebody keeps certain values alive. Swedish metallers Mean Streak are a concrete example.
On their new album “Blind Faith” they keep standing for traditional, classic heavy metal that, according to the biography on the band’s website, comes ‘straight from the heart’.
Additionally, the band has something for that lovers of ’80s hard rock with almost half of the songs here in this vein providing groove.

Far from sounding old-fashioned, the album comes across as fresh and powerful, which is not only due to the superb musical craftsmanship of the band, but also to legend Max Norman (Ozzy Osbourne, Lynch Mob, Y&T), who, together with band founder Peter Andersson, co-produced and mixed the album providing that ‘classic feel’.
These Swedes currently are among the best doing this genre, no doubt about it.
Highly Recommended