Without a doubt one of the greatest hard rock singers of the 21st Century, Norway’s very own giant Viking JORN Lande’s vocals are resoundingly strong once again on his new, ninth original studio album titled “Life On Death Road” to be released to morrow via Frontiers Music.
This new kick ass album sees Lande attacking the microphone with rejuvenated vigor, accompanied by a new band and a bigger and stronger sound.

The album also marks the debut of a new line-up of very experienced and gifted musicians around the Norwegian singer. On bass is Mat Sinner (Primal Fear, Sinner, Kiske/Somerville) who needs virtually no introduction to metal fanatics.
On keyboards and production is Alessandro Del Vecchio (Hardline, Revolution Saints), who already joined JORN for the recording of his last covers album Heavy Rock Radio and was the glue that helped Jorn to create the feel and the direction for the new album.
Francesco Jovino (Primal Fear) is on drums and Alex Beyrodt (Primal Fear, Voodoo Circle) handles guitar. Truly a recipe for a roaring success.

What has impressed me most with this album is the brilliant sound, clear yet punchy, a melding of hard rocking melodic metal, catchy songs that take pages from both bands Whitesnake and Dio while still sounding 100% like a Jorn album, combining it all into his shining moment of his career thus far.
You can certainly tell that a lot of time and energy was put into this album, and with the level of musicianship backing him up it’s an album that fans of melodic ’80s style hard rock shall rejoice getting their hands on. 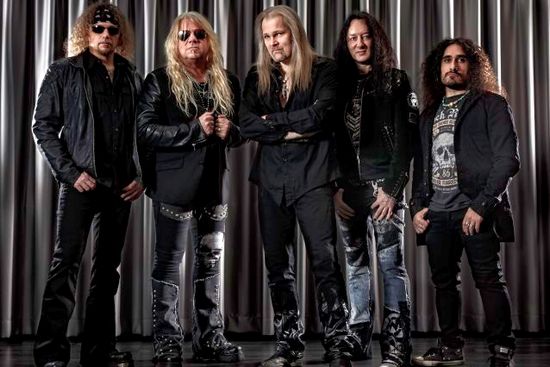 This magnificent high energy album is going to make for the perfect soundtrack of the Summer.
With tracks like “Love Is the Remedy,” “Man of the ’80s,” title track “Life On Death Road,” and “Insoluble Maze,” which are some standouts on a damn near perfect record, this album is a definite must have for all ’80s freaks.
But a Jorn album is not without some anthems and ballads which come with “Dreamwalker” and more so with “The Optimist”, definitely a more mellow AOR style tune.

“Life On Death Road could very well be Jorn’s crowning achievement. It’s that good.
Between his stellar vocals to the brilliantly memorable songs to the on-target performances, this album is one that will likely wind up on many Best Of Lists by the end of the year.
HIGHLY Recommended