Only a year after their lastest release Anglo-Swedish combo EVILYN STRANGE are back with a new album titled “Idiom” to be released tomorrow June 22.
Evilyn Strange can’t be pinned on a single musical style, although all are revolved around hard rock. The band covers a lot of ground from uptempo rockers to moody ballads and they are pretty original and effective at that.

Indeed Evilyn Strange are a versatile band, equally skilled at composing melodic hard rock songs with some occasional funky twist and much heavier rock/metal tracks. Phillip Strange’s vocals are unique and have an evocative quality with the perfect classic rock sound that makes the band instantly recognizable.

The album starts with ‘Break the Chains’, a catchy tune, melodic and heavy in turn. In fact, this opener is one of the heavier on the album. Since their last record, Evilyn Strange have been producing slightly heavier and darker music, keeping that melodious classic sound. There are some anthemic lyrics and glorious guitar riffs that remind me of some of the best ’80s and early ’90s hard rock.

‘So Far Away’ continues the dark and deep feeling of the album; this one has an addictive groove, gritty guitars and a rousing, modern chorus. ‘Father Time’ has thought-provoking lyrics delivered via a classy hard rock uptempo pace.
‘Better Days’ is a gorgeous ballad. It has a hopeful vibe even though there is a melancholic theme. The song is driven by the crisp, clear vocals and the melodic guitars. The guitar solo speaks volumes.
‘Down’ return to driving guitars; it’s bluesy, funky, and heavy, with a catchy chorus.

‘Thrown’ takes the band down to a more hard rock direction again. There is a melodic chorus and sharp guitar riffs that dive into a meaty guitar solo.
Some kind of dramatic guitars open ‘My Revenge’ and this one has a slightly Euro melodic metal sound with a pulsating beat. This song is a great example of the band’s darker side with hard rocking heavy guitars.
Next up is ‘One’, a simple yet effective melodic hard tune with funky guitars providing a dancey vibe and catchy lyrics. 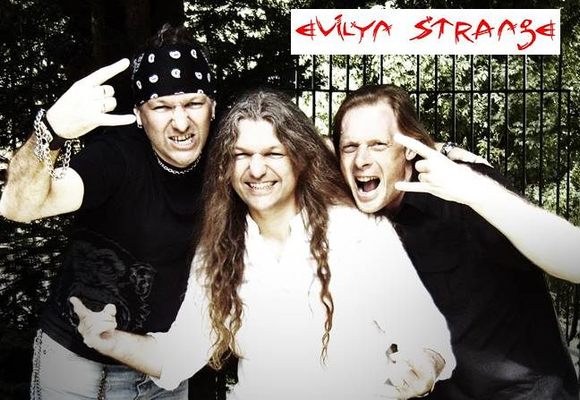 ‘Come Alive’ takes the tempo down a little; it begins as a slow, melodic, and introspective track with thoughtful lyrics. Towards the end, the guitars speed up and the track takes on a different and more rocking vibe. It continues with a tumultuous blend of guitars and drums, then slows down again to finish.
Track 10 ‘Rise’ is another commercial rock tune with crunchy guitars, ‘Waterfall’ add acoustic for a semi-ballad rocker (great guitar solo), and the album ends with ‘Messed It Up’ showcasing another side to the band as it has a rebellious edge with fast n’ heavy, cool guitar riffs and a catchy chorus.

All members in Evilyn Strange are seasoned musicians and the quality of the music they’ve created in “Idiom” is evidence of that. It’s clear that a lot of work has gone into producing this new record.

Think like a mix between The Cult, Enuff Z’Nuff and Ozzy Osbourne all into one. Whilst listening to “Idiom” I could really imagine the songs in a live setting, and I think many of them would be perfect for crowd participation.
“Idiom” is an accomplished album that deserves to be heard by a wide audience, at it has a potential appeal for fans of the most diverse, Rock related genres.
Two thumbs up.