Reissue label Talking Elephant has just released a remastered version of “Big Boy Blue“, a solo album by BERNIE MARSDEN previously only available via his website store. Originally appeared in 2003 as a 2-CD pack, now has been trimmed to a single CD / 13 tracks which works better in my opinion, rounding up 55 minutes of music.

As you may know, Mr. Bernie Marsden is one of the original Whitesnake guitarists who co-wrote many of the band’s hits including ‘Fool For Your Loving’ and ‘Here I Go Again’.
During the past decade the axe-man has been involved into various projects and bands, as well in his solo career.

“Big Boy Blue” is a solo effort where half of the songs are Marsden’s originals, and the rest covers. The album was recorded at many studio sessions featuring different vocalists and friend musicians mostly from the Blues circuit, the true Marsden musical roots.
However, you can see (or better, hear) familiar faces like Don Airey (Deep Purple) contributing keyboards, or Geraint Watkins (Mark Knopfler Band) singing leads.

There’s something for everyone here, from the early Whitesnake midtempo rockers such as ‘Lady Friend’ or dynamic tunes in the Joe Bonamassa style (‘Working For The C.S.A.’) to more traditional Blues in the style Gary Moore performed until his death like ‘Loved Another Woman’.
Additionally we find truly American seminal blues-rock songs like ‘Do It If You Wanna’ (including harmonica) which those who liked the movie ‘Crossroads’ will enjoy for sure.

“Big Boy Blue” is a very well performed & recorded album with a true Blues heart.
I suspect many of the songs where captured live into the studio as you can feel the chemistry between all involved and that ‘blues session’ atmosphere. 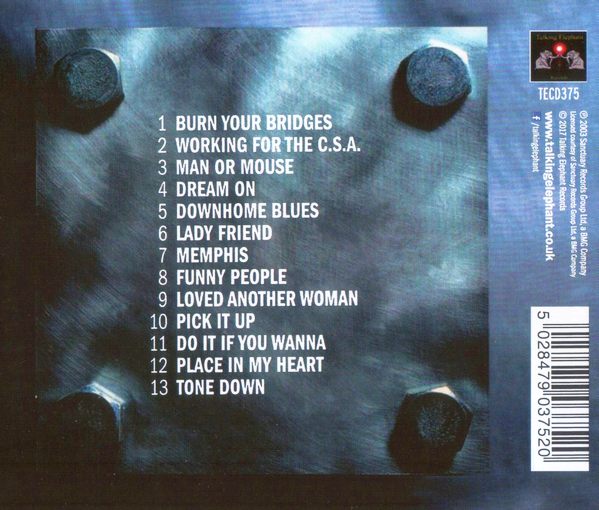 This is a fine remastering where some original tape hiss was properly removed and all instruments sound clear and separated.
Quite Recommended