One of the most talented metal vocalists from the classic era, Mr. Michael Vescera, after many years singing for others, is back with a new album under his name VESCERA, titled “Beyond The Fight”.

Mike Vescera has sung with everyone throughout his prolific career. Started in the ’80s with Obsession, the band released two very impressive albums of heavy but melodic metal merging heaviness with an almost hair metal approach loaded with hooks. A big part of Obsession‘s charm came from the powerhouse, leather-lunged delivery of Michael Vescera.
After Obsession disbanded in 88, he became a kind of chameleon, wandering the Earth selling his talents to the likes of Loudness and Yngwie Malmsteen, even putting in a regrettable stint in Animetal USA, as well as fronting several super groups (MVP, The Reign of Terror) and his own eponymous act (Michael Vescera).

Now he’s dropped the first name and created a new project with members of the Italian metal group Nitehawks (Mike Petrone, guitar and Frank Leone, bass) and Fabio Alessandrini (drums) formerly from Annihilator.
With VESCERA, the singer is poised to unleash a very ’80s flavored metal / hard assault on the unsuspecting masses with “Beyond the Fight”.
And he succeeded.

Opener “Blackout in Paradise” is winner with a classic American metal riff attack reminiscent of the material on classic Riot albums like Thundersteel, while the hooky chorus sounds like something Alice Cooper would have written in the ’90s. The guitars blaze, the drums pound and Mike Vescera wails away like a stuck banshee.
Then follower “In the Night” is even more awesome – a highlight indeed – plenty of hard rock groove, crunchy rhythm guitars and Mike vocals coming out more melodious.

That couple of first tracks pretty much sum up the kind of music VESCERA wish to deliver here: classic ’80s American metal with a melodic hard rock catchiness, especially in the choruses. 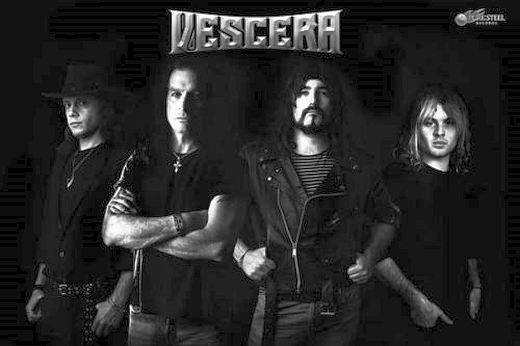 Other highlights include the very contagious, KIX-esque “Dynamite”, the heavier “Stand and Fight”, and “Looking for Trouble” which could have been an old Obsession cut.

Mike try something different with midtempo “Never Let You Go” with some Impelliteri on it, and choruses arranged in a different way.
The band resists the urge to drop a power ballad, with “Troubled Man” being as close as it gets, but even that tune is like a speedy Riot tune with some bluesy moments jammed in for extra emotion. Another highlight for me.

VESCERA’s “Beyond The Fight” is pure ’80s. Even the running time makes you think of a good ole vinyl LP. At a super tight 9 songs and 36 minutes, there isn’t much fat to trim and all the tracks have merit and replay value.
With all the songs living in that 3-4 minute sweet spot, the material flies by and no song overstays its welcome. The production is a bit skewed toward the drums, but that’s a minor issue and won’t impair anyone’s listening enjoyment.

Mike Vescera is the main attraction and his pipes have aged exceptionally well. He can still hit those higher ranges and he proves it often. At times he reminds me of Tony Moore (ex-Riot), which is unexpected but quite cool.
I’m completely unfamiliar with the band Mike co-opted to form this project, but it certainly features some talented folks. Mike Petrone is a highly skilled, flashy guitarist and there are many shreddy solo breaks to feast on here. Frank Leone’s bass-work is also admirable and often audible. The band is rounded out well by Fabio Alessandrini (Annihilator) on drums. As a unit there’s no doubt the boys have major chops, but never overdo it or show off at the expense of the songs. 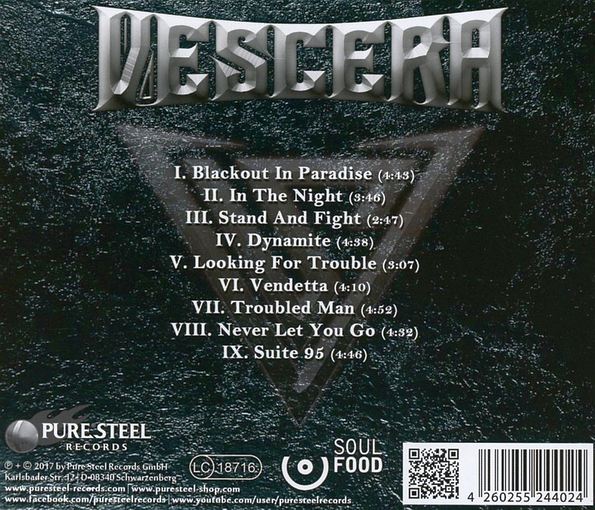 “Beyond The Fight” is an unexpected but welcome little rocker with a lot to recommend it. It’s a highly enjoyable, consistent old-school melodic metal / hard album delivered by one of my favorite metal vocalists.
It’s the best thing Mr. Vescera has released in a long time, and one of the best album in this classy style appeared recently. They don’t make albums like this anymore, so kudos to Pure Steel Records for releasing it.
HIGHLY Recommended