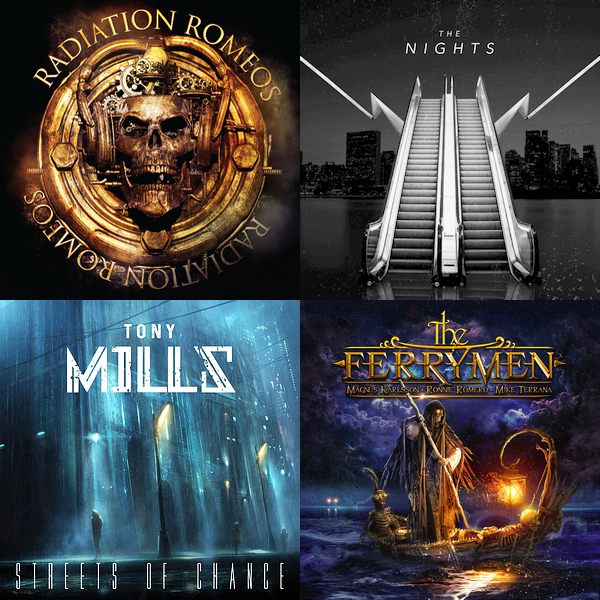 Some amazing albums coming this Spring / Summer, let’s check the advanced singles from the best of ’em. From the always colorful Frontiers Music roster, JORN is about to release his new album and ‘Love Is The Remedy’ is the rocking 2nd single.

Super-group SNAKECHARMER has presented some new tracks from their upcoming album and we are featuring a new one titled ‘Punching Above My Weight’, plus more from WARRANT new album, the highly melodic ‘Perfect’ and the hard rocker title track ‘Louder, Harder, Faster’.
Here as well INGLORIOUS new single ‘Making Me Pay’, a track with a more classic rock feeling then the other two already released as singles.

But what really surprised me from Frontiers Music are the new, two awesome bands just signed by the label.
One of them is RADIATION ROMEOS formed by the amazing singer Parramore McCarty (best known for being the frontman of such legendary US metal acts Warrior) and famed Billy Idol / Vince Neil guitarist Steve Stevens’ solo project, Atomic Playboys (in fact, the inspiration for the name Radiation Romeos came from a line in the song “Atomic Playboys”).
Wow… I’ve been waiting for years for a new Steve Stevens’ band, and this looks terrific. The first single ‘Ocean Drive’ has the best melody / razor guitar work heard in months.

And the other band signed by Frontiers is called THE NIGHT, which debut album is scheduled for August but the first single ‘Welcome To The Show’ already surfaced (not for sale yet).
This combo from Finlad is formed by Sami Hyde (vocals) who was part of the Tony Mills Band and wrote many songs for ‘The Magnificent’ album, and guitarist Ilkka Wirtanen, producer of international acts like Reckless Love, Baton Rogue Morgue, and more.
Yeah, the AOR waves of this first single will keep you hooked until August…

We have another cut from TONY MILLS (Shy, Serpentine, TNT) next solo album, featuring an impressive line-up including Joel Hoekstra (Whitesnake), Tommy Denander, Tom Martin (Vega), Eric Ragno and many more, produced by Pete Newdeck (Tainted Nation, Blood Red Saints) and mastered by Harry Hess (Harem Scarem).
This track, ‘When We Were Young’, was written by James & Tom Martin (Vega).

Ah, and 0dayrox always bring to you some exclusives: just check the first single / video ‘Cheap Little Liar’ from BLOODY HEELS, a terrific band founded six years ago but which debut album will appear in few weeks. The band describe themselves as a mix of ’80 Glam Metal / Hair Metal / Pop Metal / Hard Rock with a modern sound.
Whoa… listening to ‘Cheap Little Liar’ it doesn’t sound like a self-produced record at all. Amazing stuff.

And then you have a track – the highly melodic ‘One Man’ – from BUGZY, a band that existed in the ’80s but never inked a record contract. Now 2017 all original Bugzy’s recordings have been compiled into 1 CD to be released soon. This is pure ’80 radio ready melodic stuff, very well recorded and performed. A must for collectors and fans of Eighties Melodic Rock.

This is killer Advanced Releases compilation IMHO.
Only at 0dayRox