T’Pau’ had a string of Top 40 hits in the UK in the late ’80s, most notably ‘China in Your Hand’, ‘Heart and Soul’ and ‘Valentine’, and several hits in Europe before disbanding in the early Nineties. Decker still performs under the name T’Pau and released a very good new album in 2015 (presented on this blog).
From the outside looking in the T’Pau story seems to bear all the hallmarks of an overnight success story. The band formed in Shropshire in the UK in 1986 and were signed to a major label and recorded their debut album with legendary producer Roy Thomas Baker (Queen, Journey).

Despite the power of a major label and an A-list producer twiddling the knobs initially things were a little slow as ‘Heart and Soul’ failed to chart in the UK. The fortunes of the band would change when the single was featured in an ad for Pepe jeans resulting in a huge hit in the USA.
A UK re-release would provide the band with their first hit before ‘China in Your Hand’ would spend five weeks at the top of the British charts.
From a personal point of view, in the mid ’80s my taste in music was fixated on melodic hard rock and AOR so T’Pau (oddly named after a Star Trek character) seemed to have some pretty good tunes and just enough guitars and keyboards to catch my attention. The fact that the music videos for the singles seemed to be on MTV every five minutes may have helped.

All of this brings us, finally, to the release of this new ‘huge’ expanded edition of “Bridge Of Spies” which was originally rumored to be happening back in 2012 but these things can take time. A band such as T’Pau and other 80’s acts that have recently received the deluxe style treatment is that the 1980’s were a maze of releases that kept any fan of the band on their toes.
If you wanted to own all the various mixes, live tracks and other oddities you might well need to buy the 7” single, 12” single, Cd single, 7” Picture Disc, 12” Picture Disc and maybe even a cassette single, all almost impossible to find.
In these modern times record companies / big box retailers have invented the Target, Best Buy, iTunes exclusive content… so maybe times haven’t changed that much.

The new release of “Bridge Of Spies” is a remastered 3 disc set; the first disc features a remastered version of the album with an additional 8 bonus tracks. This is very much an ’80s album, mainly due to the production choices of the day, the drums have that crisp sound of the period.
The bonus tracks that round out the first disc include the single versions of their two signature hits, which is great for fans as ‘China In Your Hand’ was re-recorded for single release.
Other B-sides from the period include an energetic live version of ‘Sex Talk’ which demonstrates that the band could put on a good show.
Other hard to find B-sides are ‘On a Wing’ which benefits from spiky, rocking tremolo guitar parts courtesy of Dean Howard, while ‘Giving My Love Away’ is a neat catchy song that could have easily fitted into the album running time. 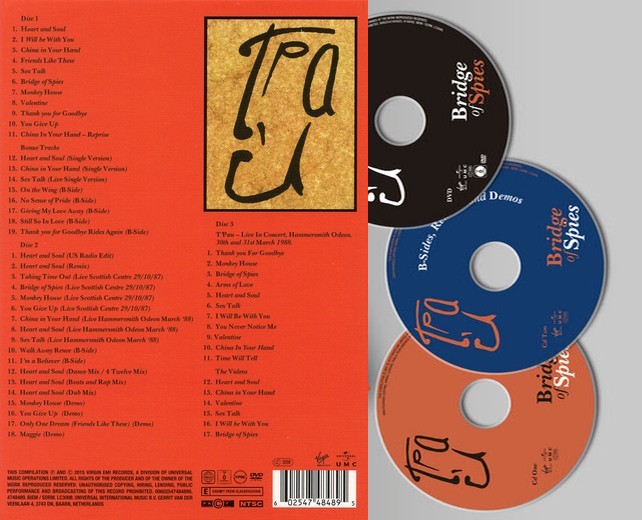 Disc two has a mix of live material from Hammersmith ’88 and a Scottish show from 1987 plus an overdose of ‘Heart and Soul’. No less than 5 more versions of the huge stateside hit are presented here including the US Radio Edit, and an extended remix which boosts drum & vocal tracks and is a must for ’80s music fans.
The exhaustive selection of material on this disc is rounded out by two cover tunes as singer Carol Decker takes a break and guitarist Ronnie Rogers do lead vocal duties on ‘Walk Away Renee’, and the guitar driven, fun and frisky ‘I’m A Believer’.
The disc concludes with four demo tracks including the first official release of ‘Maggie’ which is a very welcome addition to the set. The DVD include six official video clips and the long out-of-print VHS live show from Hammersmith Odeon 1988 finally makes it to silver disc.

Universal and the band have done a great job of pulling this together. This Expanded Edition of “Bridge Of Spies” couldn’t be more complete, including extremely hard to find material.
It has been very nicely remastered and the temptation that is currently plaguing CD releases of maximizing loudness at the expense of fidelity and resolution has thankfully been avoided.
There’s plenty of headroom for the audio to breathe. It sounds superb, noticeably when keyboards tinkle and the drums sound fatter with better base.
A highly recommended release for all ’80s music fans.