Next May 5th new project THE UNITY unleashes their self-titled debut album “The Unity” via Steamhammer Records. The main men are Gamma Ray members Michael Ehré (drums) and Henjo Richter (guitar). Richter has been part of the Hamburg power metal outfit for some twenty years, while Ehré’s CV includes – prior to his joining the Gamma Ray fold in 2012 – renowned names such as Firewind, Uli Jon Roth and Unisonic, to name but a few.
But this is a different musical beast than Gamma Ray; The Unity mix melodic metal with hard rock and AOR, and darn – they are fabulous.

Ehré & Richter are joined by Italian vocalist Gianba Manenti, guitarist Stef E, bassist Jogi Sweers and keyboardist Sascha Onnen since the launch of Ehré’s group Love.Might.Kill, which has released two albums to date (featured on this blog) and played shows in a large number of European countries.
All of which is a roundabout way of saying that The Unity are far from your average new band.
Which, in fairness, is a statement rendered as absolutely pointless by the time ‘Rise And Fall’, the first song on the album is concluded. A track that is both melodic and catchy – but done with enough of a metal kick. A killer track.
It is not alone – in fact it is just one of 12 brilliant songs that “The Unity” (the album) possesses.

‘No More Lies’ shows itself in and makes itself comfortable with a massive, chunky riff, and pummeling bass but like all its compatriots it makes wonderful use of stack harmonies and comes complete with a chorus that insists you sing it.
‘God Of Temptation’ is a more monolithic beast – one which just about restrains itself from full on Euro parping power metal. In many ways reminds me of Allen/Lande and add some hard rock groove.
‘Firesign’ has a touch of the Game Of Thrones soundtrack about it to start with, but soon develops into an epic melodic metal tune with. For clarity, this makes it very good. Indeed.

Whoa, even the slower tunes rock. Nothing here can see why less is more.
‘Not Always You’ has a tinge of balladry about it, but is heavy enough to pump a majestic chorus, and ‘Close To Crazy’ is yet more proof that the trump card here is the astonishing vocals of Manenti, who puts a fine shift in throughout.
Another song that creates excitement is the melodic rocker ‘The Wishing Well’ which reminds of bluesy hard rock a la Whitesnake and perhaps some Led Zeppelin, but done with modern style & sound.

My favorite on the record should be ‘Eden’s Fall’, the kind of punchy AOR of the late ’80s but wrapped with a vibrant modern production. Love this one.
There is more light and shade and plenty of ideas that aren’t normally on records of this type.
‘Redeemer’ has a dirty riff and more classic hard rock pump (including a chorus that brought Rainbow to my mind), ‘Killer Instinct’ has an electro fixation at the start and ‘Never Forget’ concludes things in the outright orchestral way that a number of the preceding cuts have hinted at – and finally lets itself go with a genuinely soaring Avantasia style chorus. 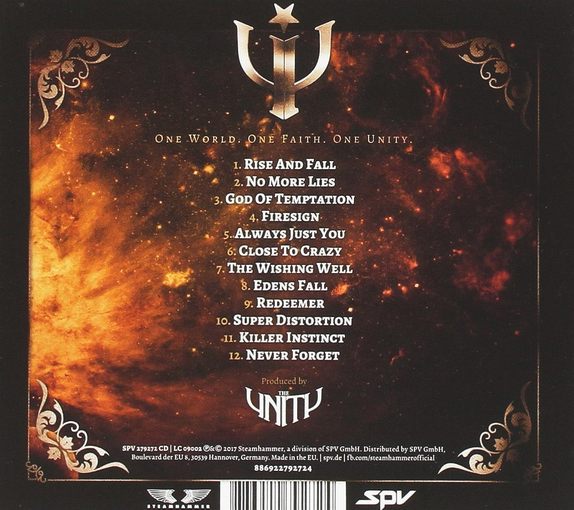 “The Unity” is a fantastic debut from this German band, a CD that lives by its freshness and dynamics mixing Euro melodic metal with classic hard rock and AOR melodies.
All songs are very, very strong, skillfully performed and produced with a clinical precision (the sound & mix are excellent).
The scary thing is that this is only their debut. Maybe The Unity will get even better and this is just the opening salvo.
Whatever, this is a brilliant collection of songs, very, HIGHLY Recommended by this blog.