AOR Heaven Records doesn’t stop to surprise us with new quality bands in their roster and STORMBURST is just another little pearl who are releasing today, May 26, their debut on the label titled “Raised On Rock“.
First of all, don’t be fooled by the CD artwork: no, this is not a classic metal album. But you can use the ‘classic’ term here for a wonderful mix of Melodic Rock / Hard Rock spiced with lovely ’80s-styled AOR keyboards.

Stormburst was formed back in 2014 by experienced musicians from the Swedish scene: bass player Kent Jansson and singer Lars-Åke Plåtis Nilsson where part of the really good band Keen Hue having released an adorable melodious album in the firt half of the ’90s.
Thomas Hansson was the guitarist for Coastline, another Swedish melodic rock band with a solid album appeared in 2003. Then, to get the special sound that they wanted, Jansson called the keyboardist he met years ago when both were members of Six Feet Under: Peter Östling.
Finally, they recruited hard hitting drummer Peter Zeke Ytterberg (also ex- Keen Hue) to complete the line-up, and the demos were sent to several labels. AOR Heaven Records immediately signed Stormburst, and the result is heard today on “Raised On Rock”.

“Raised On Rock” is a tribute to all musical heroes the members in Stormburst grew up with, and the style they love and played all their lives; classy Melodic Rock / AOR.
Opener “Show Me the Way” is like a mix of the first Bad Habit and ’80s Styx, and you get instantly hooked by these guys. Smooth melodic vocals, keyboards galore and a catchy as hell chorus.

‘Say You Will’ is just another AOR gem with ‘that’ pumping midtempo verses adorned with synths, while the chorus harmonies are to die for.
I love the AOR atmospheres in ‘Show Me a Sign’ with a slightly British feel, then ‘Touched by Love’ is a superb ballad that bing to mind Moritz. Title track “Raised On Rock” offers more great melodies and nice lyrics for all of us who love this type of music.
If you need more rocking stuff, Stormburst provide balance with ‘Under the Gun’, a hard rocker akin Scorpions (much due to Nilsson’s Meine-like vocals), and ‘Give Me’ has a bit of Treat or Fate in its riffs. 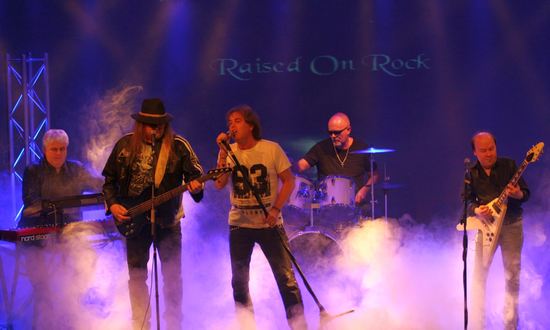 And then the band delivers another little gem with ‘All I Want Is You’, one of the best pure Melodic Rock songs you’ll hear this year. Put into the mix the first Harem Scarem, some Heartland and Scandi-like keys and you have it. A highlight.
The melodic yet more groovy ‘Lost and Blue’ bring to mind English band Daylight Robbery, then ‘Restless Hearts’ is just another terrific Melodic Rock / AOR midtempo mixing clean guitars with sharp riffs and a stadium-ready chorus. Another highlight in mere 2:47 minutes.

I am in love with Stormburst’s “Raised On Rock”. A band with a ‘metal’ name & album artwork but man, the music packed inside is first class Melodic Rock / AOR of the purest ’80s caste.
From the songs structures and the clever yet classy arrangements to the awesome melodies, contagious choruses and pristine production, this will be, easily, one of my favorite releases this 2017.
Yeah, it’s that good. Get you copy now.
HIGHLY Recommended