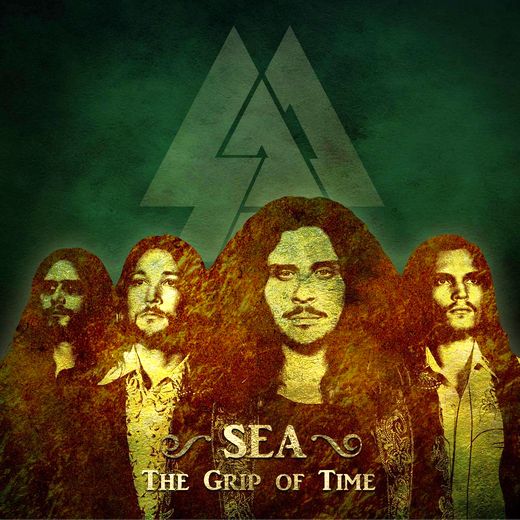 Today May 12, relatively new Danish band SEA are releasing “The Grip Of Time” their second album but the first to be appeared via the solid record label Mighty Music.
There’s a real sense of time and space to SEA’s new album, which rides retro waves like the Seventies / Eighties is still on the horizon and true Rock still rules the oceans.

The band’s powerful style is a blend of the classic heavy rock from the giants of the past and their own unique expression. Combining classic hard rock vocals, riffs galore, a twin guitar attack and a mission to keep the guitar-led rock alive, the band is a huge adrenaline boost into the current scene.
Their sound is reminiscent of legends like Black Sabbath, Deep Purple, some early Judas Priest, and essentially Thin Lizzy, plus a touch of Rival Sons but with the freshness of a young, hungry Scandinavian band in their twenties.

I can hear why SEA was chosen as support act for Tygers Of Pan Tang on their UK tour in Autumn of 2017. “The Grip Of Time” is classic stuff with a strong late Seventies / early ’80s vibe.
Taking the histrionic and emotive ‘Rust’ as an elongated call to arms we really get going with ‘Once we Were Dead’ which poses the heaviest question on the back of guitars spelt out like Rival Sons. Indeed those Americans aren’t too bad a touchstone if you upgrade the groove from rock to something altogether more metallic.
That’s not to say SEA is a metal band at all such a tag in the sense we think of it today has yet to be invented after all.
Far more brooding is ‘Time Will Let You Know’ a song that you might call dark, yet really it’s just good solid classic hard rock.

‘Shout’ adds an unexpected lightness with its rolling groove and guitar stabs, it’s probably the most representative take on their influences – hard riffs, big vocals and an innate sense of purpose.
For a band with such a straight sound you can imagine them taking the stage sounding pretty much as they do here: ‘No Dawn’ may take things down a notch but it’s just as focused and has a vibe and guitar sound not unlike Thin Lizzy’s quieter moments, with a weeping classic rock refrain.
‘Back to the Ground’ rocks harder, then drifts back, smoky and atmospheric before striking out again. ‘Sing For Your Right’ on the other hand brings the blues and that Rival Sons’ flavor finds its way into your mouth again. It’s a solid middle section to what is turning into a great album.

The last three tracks are in truth three of the most memorable, as the killer riff to ‘Dust Will Fall’ hits you’re reminded of the swagger of the hard rock behemoths of yesteryear. There’s no sense of anything as trite as NWOBHM here just the sense that the band has listened to the same formative influences and absorbed them.
Then ‘The Stranger Within’ is the band at their most rocking and raucous, all insistent vocals and wailing guitars it has a sense of urgency as it unfolds.
The last word goes to ‘Sea’ which takes its title from the band name itself; it’s a gentle melodic almost delicate piece that seems to be the calm after the storm.

Recorded in Vibe Factory Studios in Copenhagen with producer Jakob Winther (primarily know for his work with artists like Justin Hawkins of The Darkness, SEA indeed has captured the ‘vibe’ of classic hard rock into “The Grip Of Time”.
Obviously the focus has been to catch the atmosphere the band creates at their live shows. The sound is raw but warm when needed, alive and organic, and the result is something that both the band and producer should be proud of and eager to show the world.
SEA might just turn out to be a very important band indeed.
Strongly Recommended