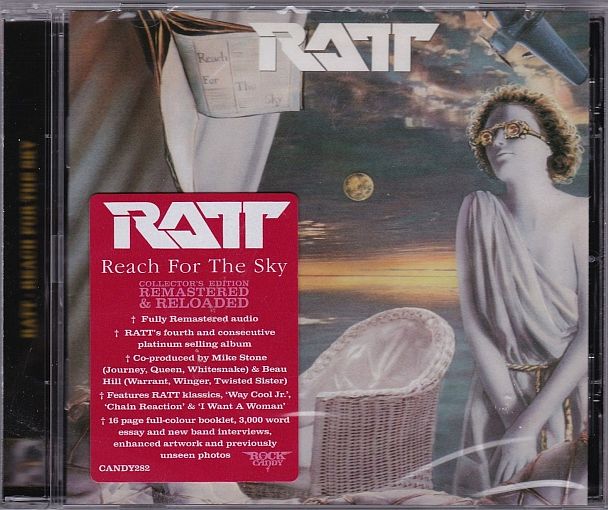 Rock Candy Records has ‘Remastered & Reloaded’ the first four RATT albums, two were already presented here on this blog, now it’s time for the other pair.
Let’s go now with the last, the band’s fourth ’80s release “Reach For The Sky“.

After the commercial and much more melodic third album Dancing Undercover, Ratt returned in 1988 with “Reach For The Sky” and this was a rocking return to the band’s origins in the vein of their debut album yet really polished in terms of production sound.
This one marked the last Ratt album to be produced by Beau Hill.

The band originally intended for the record to be produced entirely by Mike “Clay” Stone. However, substandard DAT tape recordings of Stone’s production efforts prompted Atlantic Records to bring in Hill to assist Stone and more than that, also to re-write half of the songs.

Not only “Reach For The Sky” is a solid album but also sports one of Ratt’s greatest songs ever; “Way Cool Jr.”, where they truly captured lightning in a bottle. The single prompted the record sales to over a million.
There are some other really great songs on this album such as “I Want A Woman” and the awesome “City to City”.

Also “Don’t Bite The Hand That Feeds”, “Chain Reaction”, “Bottom Line” and “What I’m After” got fire, some of them pretty elaborated.
And Ratt even did their first ‘true’ power ballad for this one; the cool “I Want To Love You Tonight”.
“Reach For The Sky” is often deemed Ratt’s weakest album from their popular era, but I find it to be of equal quality to the previous, just more rockin’ and expansive. 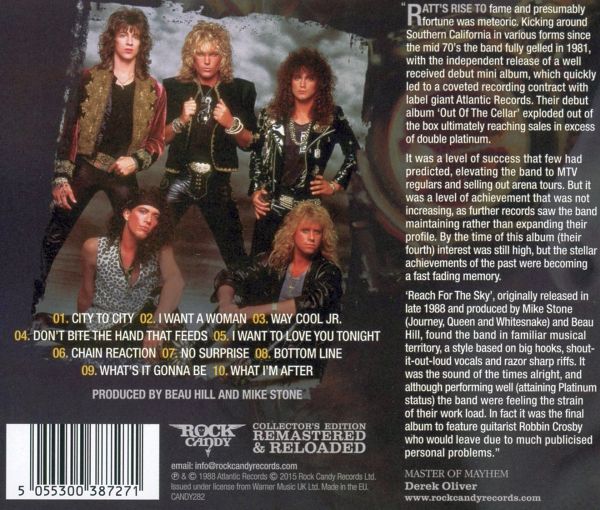 A couple years ago we posted here the Japanese remaster on SHM-CD of “Reach For The Sky”, a version with excellent sound dynamics.
This Rock Candy release, as usual with their remasters, it’s a bit more bright. This meaning not so warm as a vinyl LP but more modern, a truly ‘digital remaster’.
I know many listeners prefer the ‘vinyl-like sound’ richer in middle range equalization, but believe me, this Rock Candy remaster indeed rocks in modern player systems.
A HIGHLY Recommended album to your US Melodic Hard collection.