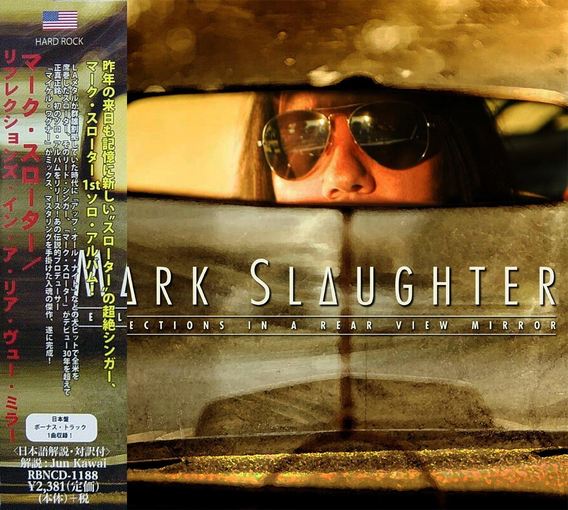 MARK SLAUGHTER, lead singer of multi-platinum band Slaughter (and Vinnie Vincent Invasion among others) is about to release his second solo album tomorrow. It’s a proper instance to revisit Mark Slaughter’s previous solo CD from two years ago “Reflections In A Rear View Mirror” in its Japanese Edition including as bonus track a song recorded in 1991, during Slaughter (the band) heyday.

“Reflections In A Rear View Mirror” is mixed & mastered by legendary expert of golden ’80s sounds: Michael Wagener. The disc includes 12 original tracks fully recorded by Mark himself with some additional help provided by long-time friends, notably the drums parts played by Mark Goodin.
Of course, and as expected, Mark Slaughter has recorded some first class American Melodic Rock in the great and timeless tradition of the Eighties era. His trademark high pitched voice is still charming and his songwriting skills strong as ever.

The opening ‘Away I Go’ is a full throttle groovy rocker, while ‘Never Givin’ Up’ display the complete radio-friendly arsenal with success… a real hit-single potential infectious tune that once more strikes it up a heavy musical notch or two.
That knack of writing super catchy commercial rock songs is still flowing for Mark Slaughter – just check out ‘Somewhere Isn’t Here’, the contagious heavy funk of ‘Velcro Jesus’, or the jubilant ‘The Real Thing’ revealing another enthusiastic melodic mood and a clear focus to enjoy a good slice of American Rock n Roll.

‘Baby Wants’ slows things down to a mellow pace, something Mark Slaughter has musically thrived on throughout his illustrious career, and the craft of his songwriting abilities is again highlighted on ‘Carry Me Back Home’, an acoustic-driven tune full of harmony and melodic moments.
Another moment of mellowness, featuring guest vocals from Gena Johnson, is ‘Don’t Turn Away’, the song having an almost countrified feel but, again, an incredibly worthy track on the tunesmithery front.
‘Deep In Her Heart’ reveals another interesting and unexpected side of Mark Slaughter’s voice and creative style.

The Japanese bonus track ‘Peace For Tomorrow’ is a must for Slaughter fans of their album Stick It To Ya, as it’s a song composed and recorded during the same era.
A classic Slaughter midtempo tune with a Skid Row vibe as well, a track that worth the purchase of this Asian Edition for sure.

As its title suggest, “Reflections In A Rear View Mirror” is an homage to that iconic sound that had Mark Slaughter and his band ruling the airwaves back in the late ’80s, with the necessary modern update.
This was the first delivery of new music from the Slaughter camp since 1999, and he has created what the fans wanted: feel-good melodic rockers and hooks to enjoy.
The style is obviously more mature than the famous Hair Metal anthem Up All Night, but the melodic hooks and catchiness are still everywhere on this very good record.
Highly Recommended