Graham Bonnet’s “Anthology” is the first all encompassing, career spanning career retrospective from this highly respected singer and songwriter, from his first hits of the late 1960s, right up to the Graham Bonnet Band in 2017.
Bonnet had a quite successful solo career during the Seventies, but the big international shot happened when he replaced Ronnie James Dio in 1979 for “Down To Earth” in Ritchie Blackmore’s Rainbow.
Worldwide hits followed with the single ‘All Night Long’ and Russ Ballard’s ‘Since You Been Gone’, represented here with the latter single’s non-album B-Side, ‘Bad Girl’.

Solo success beckoned with the song ‘Night Games’, plus Russ Ballard’s ‘S.O.S.’, from the “Line-Up” album in 1981 (featured in its remastered form in this blog), backed-up by a stellar line-up that included Cozy Powell and Jon Lord, as well as guest appearances from Status Quo’s Rossi and Parfitt.
Then Graham briefly joined the Michael Schenker Group for 1982’s “Assault Attack”, represented here with the non-album B-Side ‘Girl From Uptown’.

Recognizing that his greatest success to date was with the melodic hard rock of Rainbow, Graham formed Alcatrazz in a similar mould, with a then little known Swedish guitarist called Yngwie J. Malmsteen, and the “No Parole From Rock ‘N’ Roll” LP, producing ‘Island In The Sun’, and ‘Hiroshima Mon Amour’.
Sadly, this line-up only lasted one studio and one live in Japan album, where Alcatrazz had quickly built a huge following, and from where ‘Since You Been Gone’ is taken.

Graham evidently had a knack for finding highly influential guitar talent, recording second Alcatrazz opus with a young Steve Vai and the “Disturbing The Peace” album, featuring ‘God Blessed Video’, the anti-drink-driving song ‘Will You Be Home Tonight’ and ‘Skyfire’.
A third and final Alcatrazz record produced ‘Blue Boar’ from “Dangerous Games” before the singer hooked up with Chris Impellitteri and the band Impellitteri (‘Stand In Line’ & ‘Tonight I Fly’).

Graham Bonnet has subsequently recorded with Forcefield (‘Hit And Run’ & ‘Let The Wild Run Free’), Japan’s Anthem, the Taz Taylor Band and the super group Blackthorne that he formed with guitarist Bob Kulick in 1993, represented here by ‘Afterlife’, ‘We Won’t Be Forgotten’ and ‘Don’t Kill The Thrill’.
Over the years, Graham has also found time to reunite with Impellitteri, and more recently for successful shows with Alcatrazz and The Michael Schenker Group. 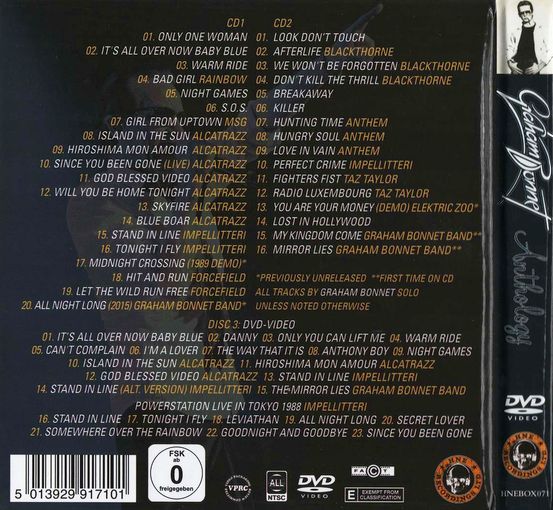 Now fronting the Graham Bonnet Band, represented here by an unreleased version of the Rainbow hit ‘All Night Long’, plus new songs ‘My Kingdom Come’ and ‘Mirror Lies’, this “Anthology” is completed by a DVD of many rare video clips taken from across Graham’s career, and includes some track-by-track intros from Graham, filmed especially for this collection.
Great stuff with a superbly remastered sound.