FASTWAY – All Fired Up [BGO reissue from master tapes] 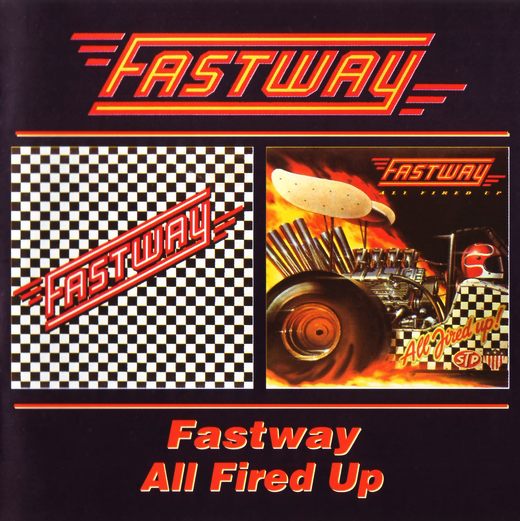 This an album that deserve a place in your collection; FASTWAY‘s sophomore record “All Fired Up“. This was requested here on the blog in its remastered form. The album was reissued by BGO Records in a 2-CD pack alongside the band’s self-titled debut, but despite being sold at Amazon as ‘Original recording remastered’, it is not.
However, on this double pack release, “All Fired Up” sound is great.

In 1984, Fastway recorded again with famed producer Eddie Kramer this, their second album “All Fired Up”. With new bassist Charlie McCracken rounding out their lineup, “All Fired Up” saw Fastway delivering a beyond-solid slate of tough-but-accessible hard rockers, among which the memorable title track, the excellent ‘Misunderstood’, and a slow-burning blues beast named ‘Hurtin’ Me’ channeled the spirit of Led Zeppelin for the ‘80s.

‘Hung Up On Love’ is very reminiscent of Whitesnake (in fact brings to mind the future Coverdale / Page album) both melody wise and lyrically.
‘Non Stop Love’ and ‘Telephone’ have a Seventies hard rock feel with an Eighties sound, with an over the top Robert Plant impression from vocalist Dave King.
A favorite of mine is ‘The Stranger’ during which King manages to do a good mix of a young David Coverdale and Dave Byron all at the same time.

Another highlight, ‘Tell Me’, is a strong heavy boogie and seemed even more guaranteed to hit with its passing resemblance to first album standout, ‘Say What You Will’ (both were built around ‘Fast’ Eddie’s deft fretboard fingerwork), but, inexplicably, it did not, joining the remainder of “All Fired Up” in falling short of commercial expectations.

And yet, although Fastway’s “All Fired Up” wasn’t as popular as the debut album,
remains a staunch favorite of ‘80s heavy rock enthusiasts, for obvious reasons; classic stuff done by musicians who know their game.
As said, this BGO Records reissue is not remastered, but it is really well transferred from the original master tapes with a rock-solid dynamic range, and it’s the best “All Fired Up” version you can find out there. For “Fastway” debut, get the terrific Rock Candy remaster here