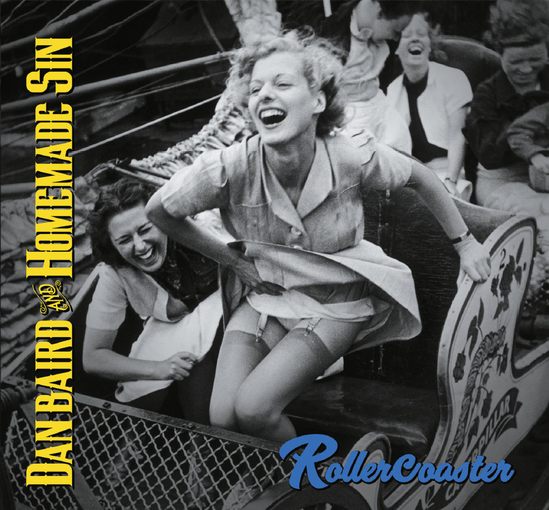 DAN BAIRD and Homemade Sin have a new album out titled “Rollercoaster“, and if you need an extra dose of classic rock you better check this baby.
Baird has released many albums since the Georgia Satellites demise, commencing with his first album in 1992 Love Songs For The Hearing Impaired, yet the records he has recently created with Homemade Sin have taken him to a whole new level.

Dan Baird has collaborated with some fantastic guitar players throughout his career, including Eric Ambel and Rick Richards – who formed a formidable musical partnership with Baird and created a legacy that stands on its own merits.
Over the last few years though, Baird’s right hand man has been guitarist Warner Hodges (ex Jason & The Scorchers) – and Hodges has been one of the key ingredients to Baird’s continued resurgence up the rock ladder.
Hodges is rock solid – and has amazing tone and finesse – yet is also a great singer and songwriter in his own rite. He has added that ‘certain something’ to Baird’s sound, and from a slew of great albums, the last two Homemade Sin albums have both surpassed each other as Baird’s best.
I didn’t think he could better 2015’s Get Loud (featured here at the blog), but I’m here to tell you – “Rollercoaster” trumps it.

“Rollercoaster” is consistently strong – top to bottom. Right from the opening track ‘Shake It Till Its Sore’, pretty much the Homemade Sin creed of making great rock ‘n’ roll for people to dance to – you know you are in for a helluva ride.
What is evident to me is that on “Rollercoaster” Baird opens up his memory bank and lyrically, there are many tunes penned about his formative years and his youth growing up in Georgia. Songs such as ‘Licka Sense’, about taking his dad’s Harley and how his dad was not an enthusiastic supporter of young Dan’s chosen career path in rock ‘n’ roll.

The imagery he creates in ‘Roll On Chattahoochee’ is another – “Big river is where I’m from” he sings, with lyrics recalling past days of about running through the Georgia Pine, his first El Camino, swimming holes and the summer sun. There’s been others who have written about the Big River, including the greats Drivin ‘N’ Cryin, yet none are as lyrically evocative as this.

There’s lotsa great rockers included too – ‘Let It Shine’, ‘It’s Alright’, and Hodge’s soloing on ‘Can Ya Hear Me Now’ oozes Rossington / Collins. There’s 13 tunes on “Rollercoaster” and no filler in sight.
‘Lay It Down’ is a great tune, with a rippin’ and rockin’ chorus. I have to make special mention of the heart wrenching ‘Do My Worst’, a truly beautiful song layered with much emotive feel and playing. If you think Baird can only write ‘runka runka 3 chord’ shtick – you are wrong wrong wrong.
He is capable of writing truly evocative songs / ballads, that can send shivers down your spine. As songwriter and lyricist, he is way underrated – not by those in the know though.

Dan Baird is the classic rock real deal.
Forget whoever else it is that the social media conglomerates tell you is rock ‘n’ roll. Take my word for it when I tell you that Dan Baird rock ‘n’ roll is the among the best there is, and with “Rollercoaster”, he has arguably made one if the best albums of his career.