This May Rhino Records continue their BAD COMPANY archival reissues started two years ago with a newly remastered Deluxe Edition of the band’s classic “Run With The Pack“.

The album is being issued as two-CD set with a bonus disc of largely unreleased material. This “Run With The Pack” expanded reissue includes unreleased early mixes of ‘Honey Child’ and ‘Simple Man’, a killer extended version of the title track, and ‘Let There Be Love’, a previously unreleased outtake from the recording sessions.
Also a track of special interest for me is the previously unreleased ‘Young Blood (Alternate Version 2)’ recorded in Grasse, France and engineered by the great Ron Nevison.

“Run With The Pack” is a terrific Classic Rock record. It’s Bad Company’s at their finest, and for many, represents their best album from their discography.
The record reiterates the raw, rowdy style of their debut, Bad Co., solidifies the loose ends that marred thier second, and adds new directions of its own.
Maybe most importantly, the album is refreshing proof that rockers don’t have to produce literature in their lyrics or cultivate personae to create good art. Bad Company’s is a purely musical triumph here.

Paul Rodgers’s voice and Mick Ralphs’s guitar continue to be the quartet’s foundation – about half of “Run With The Pack” is the loud abrasive rock they are best known for.
Ralphs is still one of the dirtiest and crudest rock chordists; his thick distortion sustains almost endlessly. But here he shines in what had been his weak area: soloing. Just check ‘Live for the Music’.
Similarly, he plays a positively sweet solo on the gentle ‘Silver, Blue & Gold’ and sports a slide on ‘Do Right by Your Woman’. On ‘Simple Man’ Ralphs combines acoustic and electric guitars to produce a primitive but imaginative result. This is also the first Bad Company song written solely by Ralphs that doesn’t explode in some way — he usually sticks to gangbusters like ‘Sweet Lil’ Sister’.

Paul Rodgers emerges as a vocal virtuoso — he is brilliant, throwing himself into different moods with ease, revealing timbres and energy he has only hinted at since his days in Free.
On ”Sweet Lil’ Sister’ he has the heat and drive of a true rocker, while ‘Simple Man’ displays the rich evenness he mastered long ago. He uses echo to great advantage; all singers seem to improve with this device, but Rodgers more than most. 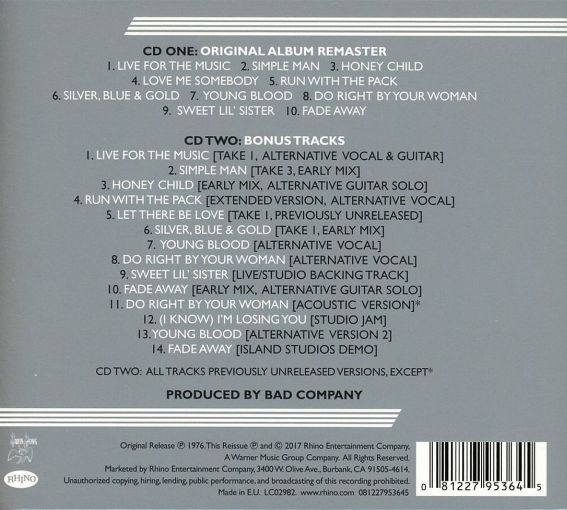 ‘Love Me Somebody’ is still another brand of excellence, a true rocking rhythm & blues performance boasting fine work by Ralphs. Rodgers’s piano and organ arrangement is pure classic rock and he gives us another stellar vocal performance.

“Run With The Pack” has depth, maturity and subtlety, and like many of classic rock finest moments, new things impress with each hearing. Even more with this pristine remastering from the original production tapes.
A Classic