Long before Loverboy and Bryan Adams focused attention on Canadian Rock, APRIL WINE was already intoxicating listeners with radio-ready melodies and plenty of guitar-driven hard rock crunch. This “Classic Masters” comprises all the hits and key cuts from their Capitol Records prime from the late ’70s to the mid-80s.
As far I know, this is the only remastered material from April Wine available.

After various albums released in Canada, Capitol America saw a lot potential in this hard rock combo and signed them. The single ‘Roller’ was eventually a Top 30 hit in the U.S.A. and the album went Gold in the USA.
‘Roller’ remained on Billboard’s Hot 100 Singles chart for 11 weeks while the LP stayed on Billboard’s 200 Album chart for 11 weeks as well.
Major artists such as Rush, Journey and Styx requested that April Wine open their shows in the United States. American audiences were finally being exposed to this “new” band called April Wine. Canada’s best kept secret was finally out in the open.

It was a confident group that recorded the next album Harder…Faster. The LP featured the hardest rock that April Wine had ever recorded. This album included such powerful songs as ‘I Like To Rock’, which American radio embraced, and ‘Say Hello’ which went to the top of the charts in Canada.
The popularity of these songs helped keep the album on Billboard’s 200 Album charts for a whopping 40 weeks! Harder…Faster helped the group collect more Gold and Platinum awards on both sides of the border.

The first months of 1980 saw April Wine touring as Nazareth’s opening act throughout the United States. In city after city promoters remarked on the powerful pairing of the bands. Most felt that the show would be a better draw if April Wine headlined.
The time had finally come for April Wine to take top billing outside of Canada. A decade of hard work had finally paid off.

The group’s ninth studio album, The Nature Of The Beast, became April Wine’s greatest success. The first single ‘Just Between You and Me’ broke Billboard’s Top 20 and remained on the their Hot 100 Singles chart for 16 weeks. The same song hit position number 11 on Billboard’s Album Rock Track chart and charted for an incredible 10 weeks.
Later that year the millionth copy of the album was sold in the U.S.A. and April Wine had finally attained international “Platinum” status.

During the 1980’s April Wine had the strongest concert repertoire ever and the demand for appearances had never been greater. They were in demand in Canada, the United Sates, England and Germany. In fact it seemed their popularity was traveling more than they were. There was the feeling that the band could tour forever.
April Wine was one of the bands to play in the now legendary first ever Castle Donnington Monsters Of Rock festival.

After a hiatus of 18 months, during which the band recorded next LP Power Play with such cutting edge hits as ‘Anything You Want You Got It’ and ‘Enough is Enough’, the band was ready to tour again. The 1982 Power Play tour was the largest tour April Wine had ever attempted.
With the release of 1984’s Animal Grace (one of my favorite April Wine records), the group’s eleventh undertaking, things took a turn for the worse. ‘This Could Be The Right One’ entered the charts very quickly but stalled just as abruptly. The album had taken an extremely long time to record and a rift had begun to form in the band.

In a move that seemed to symbolize the distance between Myles and the band, he and his family moved to the Bahamas. The group would get together once more for a farewell tour of Canada. The tour was a bittersweet one, with the die-hard fans realizing what lay ahead. A twelfth studio album was released that featured only two remaining members of the group; Myles and Brian.
After a successful tour, singer Myles Goodwyn decided to left the band for a solo career. Guitarist Brian Greenway also released a superb AOR album, then some years ago the original April Wine line-up returned and still is active today. 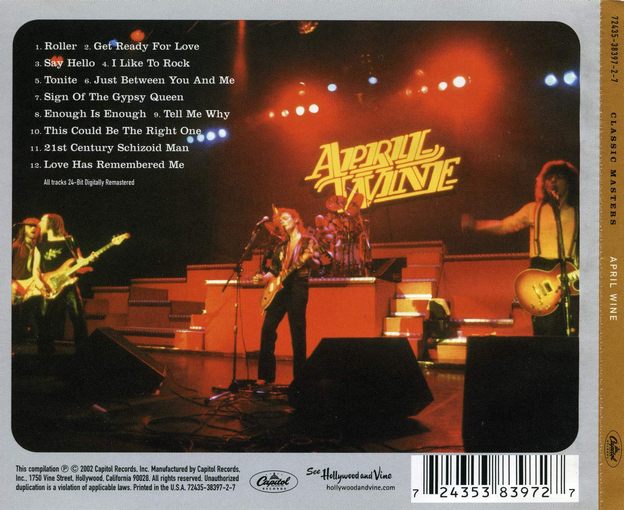 While pretty unheard and even unknown by many hard rock / classic rock aficionados, April Wine was one of the best bands of the era, crafting a hook-heavy blend of punchy rockers yet always catchy and melodic.
This is a great remaster of April Wine classics, with a balanced output. So go on and discover this highly underrated act that deserve to be listened by all fans of the genre.
Highly Recommended