Fronted by the great Russell Allen, ADRENALINE MOB will release its third studio album, “We The People“, on June 2 via Century Media. The band presents here the new rhythm section of drummer Jordan Cannata and bassist David Zablidowsky, but their punchy rocking style remains intact.

As the title “We The People” indicates, there’s a political side to Adrenaline Mob. Throughout their years as a musicians and songwriters, they hadn’t stayed silent on matters significant. Whether they were masked in metaphor or flatly conspicuous, they’ve always poured their feelings into song.
It was, as Orlando puts it, a form of catharsis. So, as they were watching the presidential campaigns, feeling the negativity — the constant bickering and finger pointing — they knew Adrenaline Mob’s next venture would be affected.

In fact, the first song Orlando began writing for “We The People” was the politically charged rocker ‘Blind Leading The Blind’. The title track is very much inspired by the past election year in America, a reflection of our times.
But overall, the songs have certain particular stories that stand on their own. Many of them are also driven by the climate we live in today and some are about having a good time, being free and loving rock ‘n’ roll. All the tracks have a personality and character to them.

Musically, “We The People” rocks big time.
The album begins with ‘King Of The Ring’ and the track goes into the usual hard rock / melodic metal sound after a rather trippy intro. Russell’s voice still has the same raspy feel and the parts with the alternating main and backing vocals have been done very well.
Next is the title track of the album and features a groovy riff with guitar harmonies, ‘The Killer Inside’ is another powerful track talking about a killer who is disguised and attacks without warning. The long guitar solo has been placed perfectly with a nice build up to it.

‘Bleeding Hands’ is a bit softer with clean toned melodies, but the tempo grow again with ‘Chasing Dragons’ where Cannata show he’s a fitting replacement for the late A.J. Pero. There’s lightning fast double bass during the chorus parts and the guitar solo.
‘Till The Head Explodes’ will literally make your head explode with the perfectly coordinated sheer musical brilliance. Then ‘Raise ’em Up’ moves away from the domain of social issues and politics to “having a good time, being free and loving rock ‘n’ roll”. 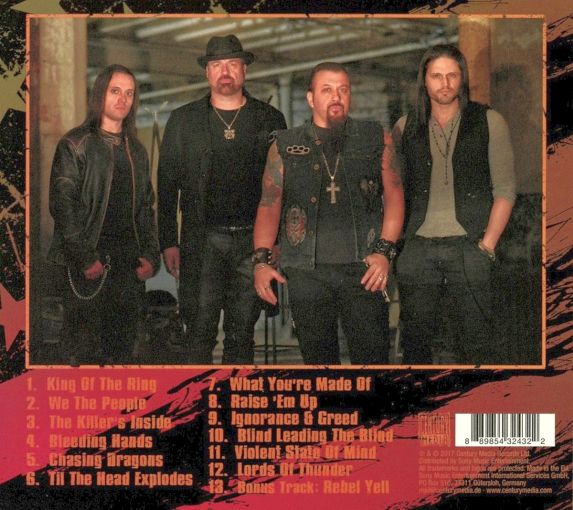 ‘Ignorance & Greed’ is heavy and aggressive with a great Allen performance, while ‘Blind Leading The Blind’ add lots of groove.
‘Lords Of Thunder’ is quite hard rockin’ having a Van Halen styled solo. Finally, the album concludes with a fantastic cover of Billy Idol’s classic ‘Rebel Yell’.

The Mob ‘rules’ again with this new album. All songs are strong, heavy, groovy and modern sounding, each telling some kind of a story relevant to the modern world scenarios.
Overall, this is one hell of a record.