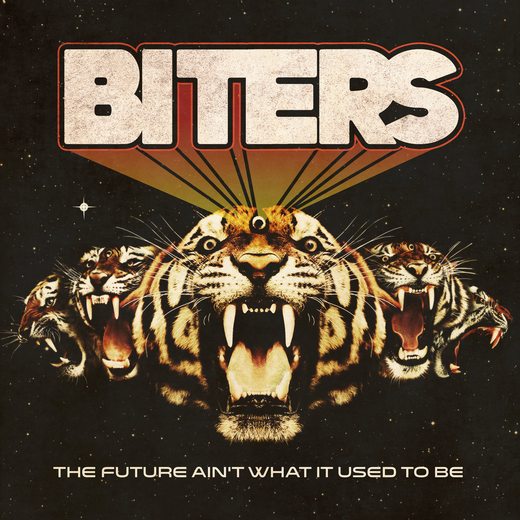 American rockers BITERS surprised a couple years ago with their debut CD delivering solid classic rock tunes in a retro fashion. Now they are back with album number two “The Future Ain’t What It Used To Be” to be released tomorrow, where they have really tapped into their love of ’70s classic (hard) rock music.

Aided by songwriter / producer Scott Stevens (who has worked with the likes of the Struts and Shinedown among others) Biters delivers a massive stomping beast in ‘Stone Cold Love’. The song has a T.Rex sound from the backbeat through to the vocals of Tuk, making for a track you want to keep playing over and over.
They have other ear candy in their arsenal with the more modern sounding ‘Let It Roll’, again a radio hit is ever there was one. Interesting musical diversion on ‘Goin’ Back To Georgia’ where the band adopt an acoustic approach.

On the album there’s some great glam on display too like ‘Gypsy Rise’, which gives fellow ’70s power pop worshippers Smash Fashion a run for their money.
Not quite ‘all killer, no filler’ though as ‘Vulture City’ fails to impress with so many strong tracks around it, but overall a stronger set of songs than on their debut album.

Biters indeed ‘bite’ with album number two, and one full of glorious Seventies flavoured glam / hard rock.
You get swagger, you get glitter, you get jumpin’ rock n roll from “The Future Ain’t What It Used To Be”, a fun and entertaining album from start to finish.
Highly enjoyable