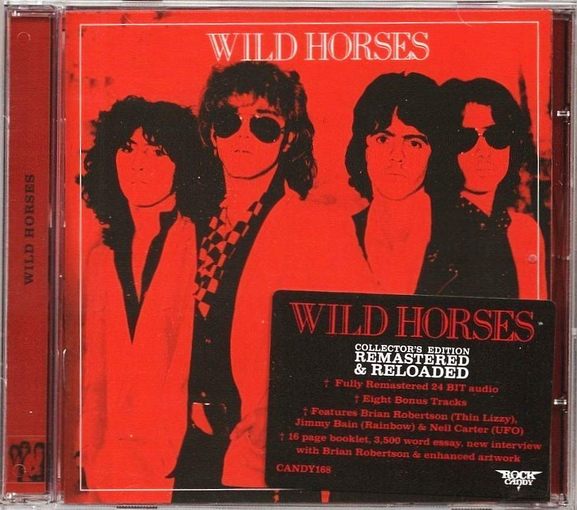 More requests on the go with the two WILD HORSES albums ‘Remastered & Reloaded‘ by Rock Candy Records, both including a bunch of previously unreleased tracks included as bonus.

Rainbow and Thin Lizzy were two of the biggest names in rock during the late ’70s so when Rainbow dispensed with the services of bassist Jimmy Bain, and Thin Lizzy dismissed guitarist Brian Robertson it was almost inevitable that the two would join forces to create a new powerhouse rock group.
Indeed, with Bain and Robertson sharing a London flat together the musical combination was quickly cemented going under the forceful moniker of Wild Horses.

Looking to solidify the line up they approached several potential drummers including, at first, former Faces and The Who stalwart Kenney Jones before settling for one time Pat Travers sticks man Clive Edwards. They also enlisted then unknown multi instrumentalist Neil Carter, later to join UFO and Gary Moore.
Stepping into Konk Studios with South African born producer / artist Trevor Rabin (later, the man who resurrected YES for the ’80s) it was this unit that cut the debut “Wild Horses” album for major label EMI, a record bristling with fresh promise.

Renowned for their hair raising personalities Robertson and Bain delivered explosive guitar driven tracks big on hooks but smooth enough to appeal to radio.
There’s strong rockers such as ‘Reservation’ and the catchy ‘Street Girl’, while ‘Dealer’ was co-written with Thin Lizzy’s former band mate Scott Gorham, and ‘Flyaway’ features the great Phil Lynott as guest.