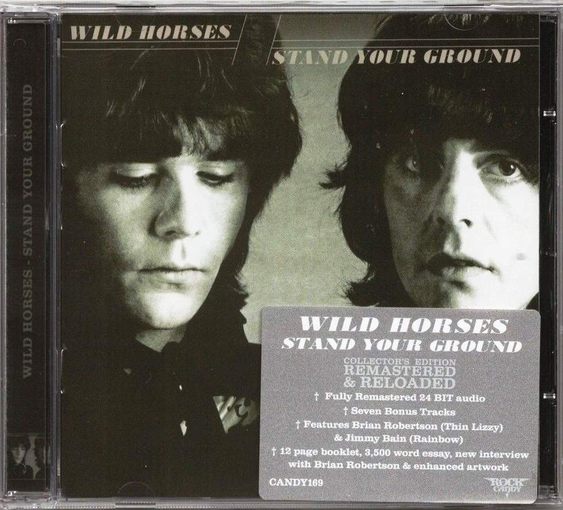 More requests on the go with both WILD HORSES albums ‘Remastered & Reloaded‘ by Rock Candy Records, both including a bunch of previously unreleased tracks included as bonus.
After the promising self-titled debut, Wild Horses went back into the studio next year to record their second album, “Stand Your Ground“.

Launched as a veritable super group featuring ex Rainbow bassist Jimmy Bain and former Thin Lizzy guitarist Brian Roberston, Wild Horses were trumpeted by the music community as the next big thing.
Indeed, their self titled debut album turned a great number of heads and confounded those who dismissed the toxic twins as mere opportunists looking to cash in on their notoriety.

With an impressive album behind them and explosive live shows helping to build up a healthy head of steam, the band’s star was decidedly in the ascendancy.
“Stand Your Ground” found the band changing the line-up with Neil Carter departing for pastures new (going on to join UFO) and being replaced by the previously unknown John Lockton.

Enlisting the help of producer / engineer Kit Woolven who had previously worked with Thin Lizzy and on Phil Lynott’s two solo albums, the band headed into Good Earth Studio, owned and operated by another Lizzy alumnus, Tony Visconti.
In keeping with the bands volatile reputation the recordings were the subject of fractious conflict between Bain and Robertson, the two men at odds with the direction the music was taking.
But perhaps the angst this caused was able to push the pair as this sophomore effort is every bit as good as the first, even if the music is not as uniform.

With that in mind, “Stand Your Ground” is a diverse and exciting record full of surprises set amidst an atmosphere of tension and nervous energy. Songs like ‘I’ll Give you Love’, ‘Back in the U.S.A.’ and ‘New York City’ (a clear to the American market) are great examples of how good this band was and how big they could have become.

Wild Horses broke up soon after this album release, then Jimmy Bain rehearsed with Scorpions and later joined Dio for an ’80s world wide success.
Brian Robertson in 1983 recorded an album with Motorhead, took part in the Thin Lizzy farewell concerts, and later played in Statetrooper and many other bands.

“Stand Your Ground” was reissued by the now defunct UK labels Zoom Club in 1999 and Krescendo Records in 2009, but this Rock Candy Records remastered release blows out of the water both in terms of sound. Additionally, there’s 7 bonus tracks completing the package.
Highly Recommended