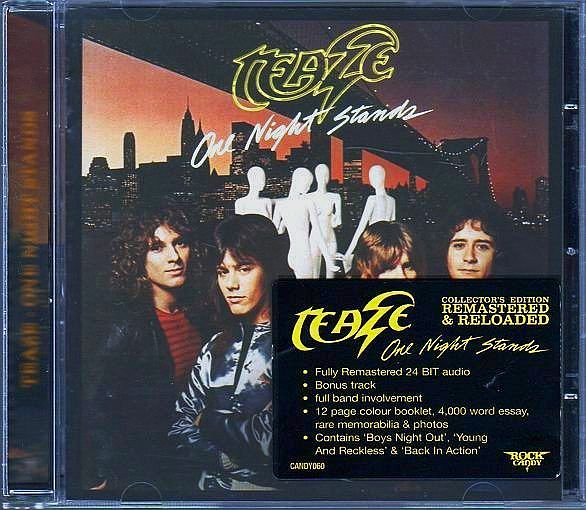 Another enjoyable request arrives to this blog in the form of “One Night Stands“, the most successful album from Canadians TEAZE brilliantly remastered by Rock Candy Records including a bonus track.

Despite their origin, Teaze’s sound always was quite ‘American’ often compared with the likes of Aerosmith, Angel and Cheap Trick. Born in the mid-Seventies, the band made an immediate impact in, of all places, Japan, where their explosive riffs, poptastic hooks, colourful glad rags and no holds barred on-stage energy immediately elevated them to stardom.
Buoyed by this success, the band continued to consolidate their Canadian presence before scoring a much coveted Stateside deal with Capitol Records.

“One Night Stands” was their debut for the label in the US, and for this debarkation into the biggest market in the world Teaze spiced their original hard rock attack with high doses of melody, even AORish at places.
Produced to maximum effect by April Wine main-man Myles Goodwin with a slick, super polished sound and loaded with prime time guitar-driven anthems such as ‘Back In Action’, ‘Red Hot Ready’ or ‘Reach Out’ the album did it pretty well in the first weeks of its release.

There’s also a fine rocker in ‘Through the Years’, but my favorite from the record are the highly melodic and bordering AOR numbers ‘Boy’s Night Out,’ a hedonistic anthem with few equals, and the catchy ‘Heartless World,’ which pretty much encapsulates the essence of the band.

This Rock Candy remaster include as bonus track the nice midtempo semi-ballad ‘Loose Change’, a song only appeared in the Canadian version of the album, which for the US release was replaced with ‘Stay Here’, also featured into this reissue. 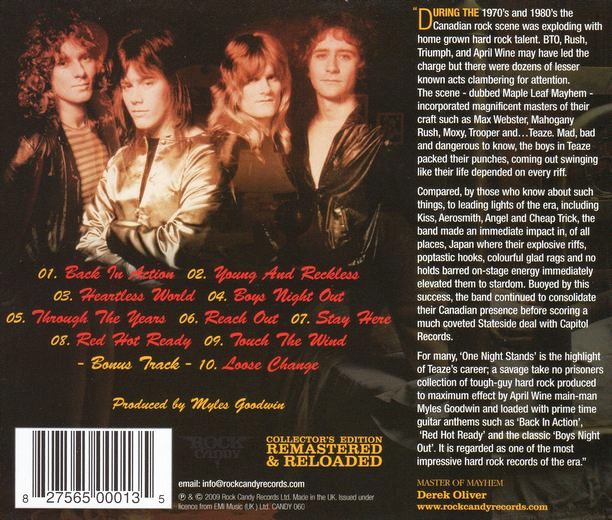 “One Night Stands” had all of the right ingredients to make it a hit, but, despite this, the timing was just not right. Disco music was dominating the charts, new wave was becoming the current rage, and punk rock was rearing its ugly head.
The music world in general was in turmoil, and this type of commercial styled melodic hard rock was some kind relegated, causing the album to become a commercial failure.

A shame, because “One Night Stands” is a great record in all aspects and Teaze an act that should have received more recognition.
So, this Rock Candy Records remaster is a more than welcomed reissue to re-discover this little pearl which deservedly achieved a cult status over the years.
Highly Recommended