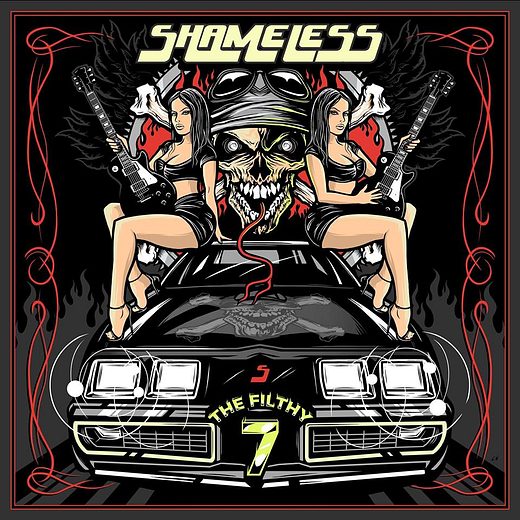 Melodic hard rock / glam metal “supergroup” SHAMELESS will be releasing a new studio album entitled “The Filthy 7” next April 17. Shameless, at the core, are founder bassist Alexx Michael along with BC Sleaze (guitars).
The German band have had an on-going host of guest singers throughout their career which has included a who’s who of ’80s frontmen, and “The Filthy 7” continues with that pattern including Tuff’s Stevie Rachelle (who now it’s the official vocalist in the band), plus lead vocal appearances by Phil Lewis (L.A. Guns) and Steve Summers (Pretty Boy Floyd).

The aforementioned shouters have all appeared on previous Shameless records but there is one newcomer in Frankie Muriel, best known for his work with the St. Louis based KingoftheHill and Dr. Zhivegas. He makes his debut singing 2 tracks, including the lone cover of Billy Ocean’s ‘Get Out Of My Dreams’.
Guitar duties on “The Filthy 7″ were handled by co-founder BC Sleaze and Tracii Guns (L.A. Guns), while drums were performed by another German based musician, Tommy Wagner.

“How the Story Goes” opens the CD with sure fire: sleazy melodic vocals by Stevie Rachelle, a killer guitar tone and a catchy chorus. A song very reminiscent of the UK Glam movement but with all the melodic hard rock swagger Shameless is known for. A highlight.
All previous shameless albums featured a cover song, and “The Filthy 7” is not an exception: they do here a punchy version of a famous ’80s hit; Billie Ocean’s “Get Out of My Dreams, Get into My Car”. Great and fun rendition.

“I Don’t Wanna Know” is another strong rocker, guitar driven, with a kickin’ drum beat and elaborated melodic backing vocals. “Can’t Get Enough” reminds me of a classic KISS song style / structure all over, yet with an updated sound.
Track #5 “It Can’t Be That Bad” slows down for more melodic rock affair (very good work by Frankie Muriel on leads), then “Serial Cheater” is a dirty rocker with jumpin’ guitar all over. Next, “WTF R U” is a bit generic glammy rocker, however lyrics are fun.

“Getaway” is a quite different beast, that kind of ’80s bluesy melodic hard rocker with a pumping bass line, thunderous drums, multi-layered vocals and a killer solo, overall bringing to mind Baton Rouge, and why not, Cinderella. This is the Shameless I like more, and a new highlight for me.
“Love Game” is another favorite. It starts with a great, catchy riff plenty of coolness and then develops into an infectious sleazy, melodic hard rock number.
“Wild in the Night ” is pretty glammy akin the glory Sunset Strip days sporting a catchy chorus and a vocal work of Steve Summers resembling Vince Neil & Motley Crue.

On “The Filthy 7” Shameless delivers another strong, enjoyable record.
This time the guys have added a more glam orientaton to the proceedings, and while this provides a welcomed variation, I miss the more pure melodic hard rock sound of yore. Don’t get me wrong, there’s plenty of catchy choruses on “The Filthy 7”, just some of the tracks are more raw and in your face glammy-sleazy stuff.
Two thumbs up!