After 27 years from their cult debut album this time it’s for real: melodic rockers RAW SILK will release their long awaited follow-up titled “The Borders Of Light” next April 28.
Again entirely written by founder member drummer / keyboardist Kostas Kyriakidis, now the new line-up include British musicians and was recorded in Birmingham, England.

Raw Silk burst onto the European Melodic Rock / AOR scene in the ’90s with their, over the years, cult debut album Silk Under The Skin. The 2004 re-release on CD brought the band back to the forefront and led to high profile reunion concerts supporting Pink Cream 69, Jeff Scott Sotto and Winger.
After a second long hiatus and led by composer-drummer Kostas Kyriakidis the band has regrouped in the UK with a brand new line-up, and the result is “The Borders Of Light”.

Starting from the album artwork, the original Raw Silk elements are still there ranging from strong melodies to colorful keyboard lines and hard solid guitar riffs. The songs are benefited by new singer Chris Dando vocals – at places sweet and melodious yet stronger when needed.
While the AOR factor is still present all over the record, this Raw Silk 2017 explore varied waters such as neo / light prog, elaborated melodic rock and even some hard.

In the latter we have ‘Out of Reach’ (the more AOR tune here in the vein of the debut CD) ‘One Lifetime’, ‘Nobody Fills the Loneliness’, midtempo ‘Night Time Angels’, and ballad ‘The Road You’ve Taken’ adding nice acoustics.
In the more expansive side there’s ‘Chimera’ with some harder passages and proggy shifts, and title track ‘The Borders Of Light’, where the neo prog sections appear mixed with melodic rock.
This, the title track, is only available on the physical CD edition of the album, quite strange for those aiming to only purchase the digital version. 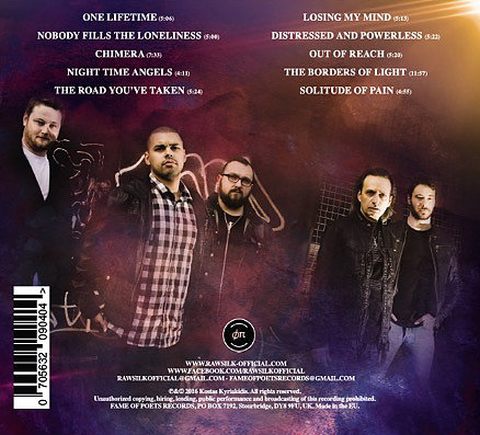 “The Borders Of Light” is a welcomed return from Raw Silk into the scene, musically moving on a bit in style from the first album.
It’s a fine blend of Melodic Rock, AOR, neo-prog and more. This new album offer something back to the first-time fans while also offering something for new listeners.