MIKE + THE MECHANICS will release tomorrow April 7 their first album since 2011, the nicely titled “Let Me Fly“. This is the eighth studio effort from Genesis co-founder Mike Rutherford’s other hit-making band.

“Let Me Fly” is the second record to feature the current Mike and the Mechanics lineup, which coalesced around singers Andrew Roachford and Tim Howar in 2010. Keyboardist Luke Juby, drummer Gary Wallis and guitarist Anthony Drennan round out the band.
Vocalist Paul Young (who sang the hit singles “All I Need Is a Miracle” and “Taken In”) died in 2000; Paul Carrack (“Silent Running,” “The Living Years”) left in 2004, around the time the band took a break. They returned with a 2014 update of ‘Living Years’, which went to No.1 in the chart 25 years earlier.

After the six-year hiatus, the songwriting zeal is just as strong in Mike Rutherford’s antidote to life in Genesis. And having struck gold back in the ’80s with the smooth and silky voice of Paul Carrack perfectly complementing the raspy style of the late Paul Young you have to say that Rutherford most definitely secured the services of another remarkable pairing with Roachford’s heartfelt soul giving way to Howar’s more theatrical and dramatic tones.

The opening pair of songs sums up the Mechanics doing what they do best, a mellow, laid back title track with a soaring message of hope, and, yes, with a choir reminiscent of their classic The Living Years.
The other is the uptempo and punchy ‘Are you Ready’; evidencing the yin and the yang of the two vocalists and yet very much working as one.

Thirty odd years and eight albums since Rutherford put together the Mechanics to complement his day job, the band and its leader are still going strong with the pleading ‘Save the World’ and lead single ‘Don’t Know What Came Over Me’ – just a couple of the other highlights across an album that is full of them.
‘Wonder’ could be a Don Henley song, while of course, we have excellent ballads in ‘Love Left Over’ and ‘Save My Soul’, with Anthony Drennan providing imperious guitar echoes throughout. 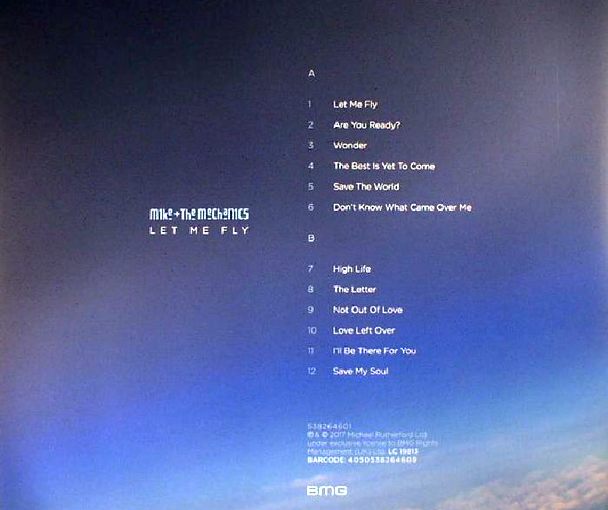 I always loved Mike + The Mechanics melodic, uber-polished sound. “Let Me Fly” is easily among their best works.
Top quality song-writing, immaculate production and completed with the joyously raspy vocals from Andrew Roachford and Tim Howar, the Mechanics have returned with an updated take on their ’80s heyday. And in great form.
Highly Recommended