“Kings Of Broadway” is the self-titled full length debut from Italians KINGS OF BROADWAY, originally formed back in 2011 by guitarist Aldo Lonobile. Aldo is considered as one of the most recognized guitar players & composers from the Italian metal scene (founder member of bands like Secret Sphere, Civilization One and Shadowspell).
Despite his metal music background, Lonobile wanted to create a completely different sounding band inspired by the classic hard rock acts from the ’80s.
And the resulting “Kings Of Broadway” is a thoroughly entertaining, killer hard rock debut effort.

“First Day Of My Life” which kicks-off things here is pure gold. Hard rock with attitude akin Lynch Mob’s first album that includes rough vocal lines, a heavy riffing and a chorus line to sing-a-long all day. Lead singer Tiziano Spigno certainly nails this genre, and the rhythm section is steady, rock solid.
“Berserk” is another killer, groovy tune, “Dancing On The Edge Of Time” is a ballsy hard rocker, then with “Never Enough” the band delivers a more commercial / melodic hard rock oriented track that makes you push the repeat button several times.

On the fourth track “Quantum Leap” you hear a unique sound with the band and singer coming into their own and putting the ‘Kings Of Broadway’ stamp on every aspect of the song.
Spigno is a gifted singer with a beautiful voice as evidenced in the slow tempo track “Through It All” and the rock version of One Republic’s smash radio hit “Counting Stars” which on paper probably made no sense until you hear their version.
It’s far more exciting and interesting than the original boy-band hit and a real testament to the range and talent of this unique and hopefully lasting band. 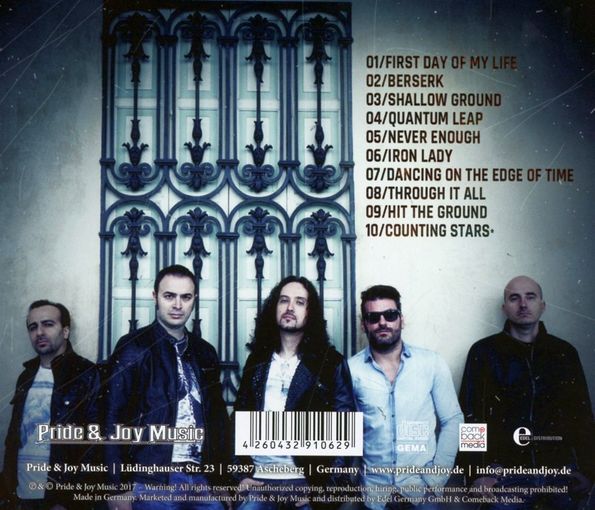 Kings Of Broadway comes out of nowhere to stop the press with their ‘ballsy’, melodic and edgy heavy rock debut album. This is true, real hard rock with tons of attitude and punch, but an extremely polished production.
Kings Of Broadway is what many fans have been asking for years: hard rock bands that do more than prance and scream but instead perform with a drive to make fresh what others have taken for granted.
One of the surprises of the year… terrific album.
HIGHLY Recommended